Jordanian writer Nahed Hattar has been jailed pending a police investigation of a cartoon he shared on Facebook that has caused outrage among Muslims.

An arrest warrant was issued on Friday for Hattar who turned himself in to authorities on Saturday, his former lawyer said.

After questioning, Hattar was remanded to Amman’s Marka prison pending a probe into his alleged crime of causing “sectarian strife and racism”, according to Jordan’s official Petra news agency.

Hattar, a controversial journalist and writer who is known for his support of Syria’s President Bashar al-Assad, posted the cartoon on his Facebook page on Friday.

It is not known who produced the cartoon, titled “God of Daesh” (the Arabic acronym of Islamic State of Iraq and the Levant, or ISIL). The cartoon shows a fighter from ISIL, also known as ISIS, sitting next to two women and asking God to bring him a drink.

Following a strong backlash in Jordan over the cartoon, Hattar said on his Facebook page that he had not intended to cause offence to Muslims but wanted the cartoon to “expose” how ISIL “envision God and heaven”.

In a second explanation on Facebook, Hattar said that “as a non-believer” he respected “the believers who did not understand the satire behind the cartoon”.

Hattar’s lawyer, Faisal al-Batayneh, accompanied him for questioning at the magistrate’s office in Amman, but later withdrew from the case on religious grounds.

“Once I found out about the details of the case and about the offensive cartoon, I decided that my conscience and my commitment to the noble Islamic Sharia would not allow me to continue to represent Mr Hattar in this case,” he said in a statement on Sunday.

Batayneh said that the while Hattar had acted insensitively and had made a serious error in judgment by sharing the cartoon, the legal case against the writer was weak and should be dropped.

“He did not stoke sectarian and religious feelings in a malicious manner,” he said.

This is not the first time Hattar has run into trouble with the law in Jordan.

Batayneh said that he had defended Hattar several times in the past and that the writer had been acquitted on a number of charges, including insulting Jordan’s king.

Jordanian lawyer Saleh al-Najdawi told Al Jazeera that under the current law, insulting God carries a jail term of between three months to one year.

While Jordan’s constitution states that Islam is the official religion, the country is secular with strict separation between state and religion, Najdawi said. The constitution is based on the Napoleonic Code of French civil law with several stipulations and amendments based on English common law, he added.

Until several years ago, Jordanian law did not include a penalty for those who insulted God based on the legal reasoning that the divine entity would not require the defence of humans. 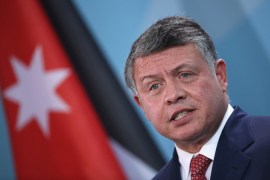 King Abdullah granted power to make key appointments in move opponents say will give those in the jobs impunity. 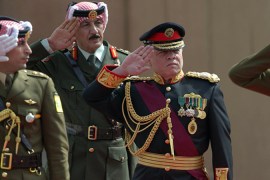