At least three people have been killed and many others, including foreigners, injured in bomb blasts across the country.

One woman was killed and 10 people injured in a double bombing at the Thai beach resort of Hua Hin, Thai police said.

Nobody was injured in the first explosion at about 10pm local time on Thursday night.

The second bomb exploded near a busy intersection where bars are located and is popular with local and foreign visitors.

A motive for the bombing was not yet known, the deputy police chief said. The injured are being treated at a local hospital, he said.

Friday marks the birthday of Thailand’s Queen Sirikit, which is also Mother’s Day in Thailand.

Hua Hin is a popular upmarket Thai resort south of Bangkok where many people would have travelled to spend the holiday weekend.

In a separate incident earlier on Thursday, a bomb exploded at a market in the southern Trang province in Thailand, injuring six people. Police believe that explosion was related to a local dispute. 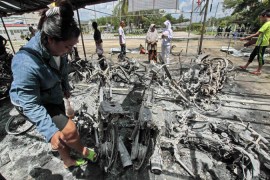 At least two killed and dozens others wounded in explosion near hotel in Yala province, wracked by Muslim insurgency. 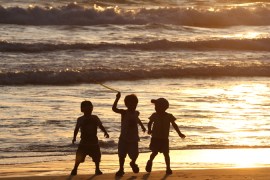 Police are not certain who left the explosive-laden pickup truck near the police station in the popular tourist area.