An explosion at a power plant in China has killed at least 21 people and injured five, according to state media, the latest deadly industrial accident in a country that struggles with poor safety standards.

Thursday’s blast took place a day before the first anniversary of massive explosions in a hazardous-material warehouse in the northeastern city of Tianjin that killed nearly 200 people, one of China’s worst industrial accidents in recent years.

The blast in the city of Dangyang in the central province of Hubei occurred around 3:20pm local time on Thursday, when a high-pressure steam pipe exploded, the official Xinhua news agency said.

“The injured have been rushed to hospital,” it said, adding that authorities had launched a rescue effort, although the cause of the blast had not immediately been pinpointed.

Deadly accidents are relatively common at industrial plants in China, and anger over lax standards is growing after three decades of swift economic growth marred by incidents from mining disasters to factory fires.

Friday is exactly one year since one of China’s worst industrial accidents. An estimated 173 people were killed after two huge explosions in the busy port of Tianjin.

An official report blamed the blasts on hazardous chemicals stored illegally in a warehouse and 25 people, including members of the government, are still under investigation.

Al Jazeera’s Adrian Brown, reporting from Tianjin, said: “In February an official report said the explosions were the result of a culture of mismanagement at the warehouse where the chemicals were stored as well as lax oversight by regulators.”

Experts believe that the soil at the blast site in Tianjin may still be contaminated with toxic chemicals.

At the moment, a giant plastic sheet covers a mound of mud at the site of the explosions.

“This is the first stage of a delicate operation to move the soil to a purpose built storage facility four kilometres away,” Al Jazeera’s Brown said.

“But some people worry the area will never be safe.” 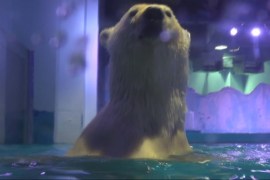 Online petition signed by more than half a million people demands closure of theme park where the animal is on display. 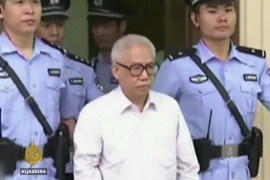 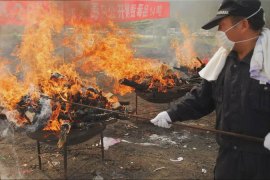 The other China boom