Russia’s federal security agency says it has thwarted “terrorist attacks” by the Ukrainian military in Crimea, which Moscow annexed from Kiev in 2014, and beaten back an armed assault.

The FSB said on Wednesday that one of its officers was killed in an armed clash while arresting “terrorists” on the night of August 6-7, while a Russian soldier died in a firefight with a “sabotage-terrorist” group sent by the Ukrainian defence ministry on August 8.

Kiev has firmly denied claims that it plotted or carried out any attacks.

The FSB – which controls Russia’s border guards – said it had “foiled terrorist attacks on the territory of Crimea prepared by the intelligence directorate of the Ukrainian defence ministry.

“The aim of the sabotage and terrorist attacks was to destabilise the social and political situation” before elections in Russia and Crimea next month, it said.

The security agency said that in the August 6-7 raids, several people were detained, including a Ukrainian military intelligence officer, and a cache of explosives was discovered.

“On the night of August 8, 2016 special operations forces from the Ukrainian defence ministry carried out two more attempts to make a breakthrough by sabotage-terrorist groups,” it said.

The assault included “massive firing from the side of the neighbouring state and armoured vehicles” but was beaten back by the Russian authorities, the statement said.

Ukraine’s defence ministry dismissed the allegations as “nothing more than an attempt to justify the redeployment and aggressive actions” of Russian forces in the region.

The allegations are likely to fuel further tensions in the feud between Russia and Ukraine, sparked after Moscow annexed Crimea following the ousting of Kremlin-backed president Viktor Yanukovych in a popular uprising. 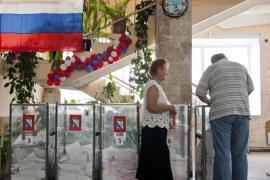 Vladimir Putin’s United Russia party leads with 71.04 percent of the votes in an election derided by critics as biased. 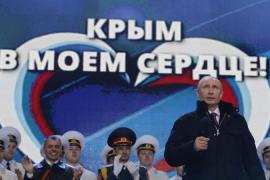 How to defeat Russia

After the annexation of Crimea, what can Ukraine and the West do to contain Russia? 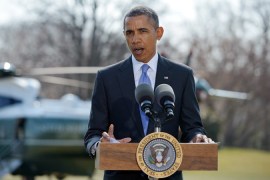 US and EU widen penalties on Putin’s allies over Ukraine crisis, with Moscow responding in kind to “hostile thrust”.