Philippine President Rodrigo Duterte has threatened to declare martial law, if the country’s judiciary interferes with his ongoing war on drugs, which has already killed more than 500 people since he took office.

“If this will continue and if you will try to stop me, then fine. Would you rather I declare martial law?” a visibly angry Duterte said in a speech on Tuesday, before military troops in the southern island of Mindanao.

“Filipinos are getting killed. I grieve for so many women raped, men killed, infants raped,” because of drug addiction, Duterte said.

“Please do not create a confrontation, a constitutional war, we will all lose.”

The president was reacting to a letter Chief Justice Lourdes Sereno sent to him on Monday, questioning his decision to release the names of judges accused of being involved with the illegal drug trade.

The head of the Supreme Court said only the court has the authority to oversee judges.

In her letter, Sereno wrote that while the judiciary shares the president’s sentiment that “dangerous drugs have been destroying Filipino lives and families”, a legal process should be followed before judges are named in public.

The chief justice also pointed out that judges have been targeted by criminals, including drug lords, with 26 reported assassinations since 1999.

Duterte has repeatedly said that he has a “sworn duty” to protect the Philippines from the threats of illegal drugs and creeping narco-politics.

Aside from judges, Duterte named other government officials including mayors and members of Congress on Sunday.

He was quoted as saying, “I don’t care about human rights, believe me.”

“No surprise there,” Heydarian told Al Jazeera. “But obviously it has raised more concern now since some quarters are beginning to question whether he respects the constitutional principle of separation of powers.”

He said that Duterte’s actions during his first 40 days as president showed that “when it comes to his core policy objectives, he seems uninterested, if not averse, to any perceived interference.”

The Philippines has a history of being governed under martial rule. In 1972,  President Ferdinand Marcos declared martial law, paving the way to a dictatorship that lasted until he was ousted in a popular revolt in 1986.

But Fe Zamora, an expert on the Philippine military and senior editor at the Philippine Daily Inquirer, said that unlike Marcos, Duterte faces more hurdles before he could declare martial law.

“Times have changed. The power to declare martial law is not absolute under the 1987 constitution,” Zamora told Al Jazeera.

“It needs the concurrence of majority of Congress within 48 hours, and the Supreme Court may review it.”

Zamora, who helped produce a groundbreaking documentary on the Philippine martial law, said that with just over a month as president, it is unclear how much hold Duterte has on the military, in enforcing his order.

“Marcos was in power for seven years when he declared martial law. He already controlled the military. All the generals were loyal to him. But Duterte has been in power for 40 days only. Does he really have a hold on the military?”

What she is seeing now is “more of a police state, rather than a military siege”, Zamora said, adding that she has witnessed people in the capital Manila “being stopped on the street, body-searched especially at night”.

As of August 8, a tally done by the Philippine Daily Inquirer showed that 564 people with suspected links to the drug trade have been killed since Duterte took office on June 30.

Police said that the anti-drug campaign had been a success with tens of thousands of people turning themselves in to authorities. 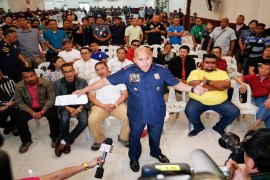