The Arab coalition has denied launching air strikes on the Yemeni capital, pointing out that Tuesday’s air raids of the alliance warplanes were in support of the Yemeni forces north of Sanaa.

Brigadier General Ahmed Asiri, the military spokesman of the coalition, told Al Jazeera from Riyadh on Wednesday that it was important to “correct information” reported on Tuesday that claimed the alliance hit a factory in Sanaa city, killing 14 people.

“We are not striking Sanaa, we are providing air support for the loyal army to the government in Nehm [district of Sanaa province] and we strike the positions of the forces belonging to the [former President] Ali Abdullah Saleh and to the militia’s outer ring of the capital Sanaa,” Asiri said.

“It is important to know that we are not attacking Sanaa as the capital.”

He was referring to media reports that quoted medics as saying that civilians were killed in a strike on a crisps factory in the Nahda district of the capital.

Residents said the factory was inside an army maintenance camp that had been hit by repeated air strikes since fighting began in March last year.

We are keen on preserving Yemeni blood and property.

“We tried today [Wednesday] to continue to support the legitimate government … and also to protect the southern border of the (Saudi) Kingdom,” Asiri told Al Jazeera, adding that Houthi rebels fired another missile and killed civilians in Saudi Arabia’s Jizan city on Wednesday.

The rebel-controlled Saba news agency said one missile was launched towards a military base across the frontier, without providing further details.

The increased violence came after UN-brokered peace talks in Kuwait between representatives of the government and Houthis ended without a breakthrough.

Mohammed Maqdishi, Yemeni army chief of staff, told Al Jazeera that the military operation that was supported from the air by the Arab coalition would continue on all fronts.

“It will be targeting Al Bayda, Zamar, Saada and other provinces, because we honoured the truce but the enemy did not,” he said.

“We had hoped Yemen could find a way out of this war. We are keen on preserving Yemeni blood and property and Yemen’s security and stability,” he said.

“That is why the political leadership handed down orders to the armed forces to launch this campaign on all fronts.”

The United Nations said it was alarmed at the resumption of air raids.

“The secretary-general is deeply concerned about reports of increased fighting between various parties in Hajjah, Saada and Sanaa provinces, including over the past few days,” said Farhan Haq, deputy spokesman for UN chief Ban Ki-moon.

“The reported escalation in fighting exacerbates the already dire humanitarian and human rights situation and the suffering of the Yemeni people.” 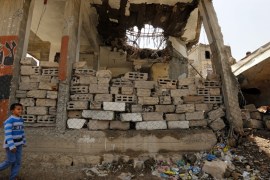 UN-sponsored negotiations end without an agreement after Houthi rebels and their allies announce a new governing body.