Syrian rebels have launched an offensive aimed at breaking a government siege of eastern Aleppo, where the UN estimates some 300,000 people are trapped with dwindling food and medical supplies.

A rebel alliance that includes the Jabhat Fatah al-Sham group – which was formerly the al-Qaeda-linked Nusra Front – and the Ahrar al-Sham group said it had taken army positions in the southwestern government-held parts of the city within the first few hours of launching a battle to break the siege imposed on rebel-held areas.

Al Jazeera’s Milad Fadel, who is embedded with Syrian rebels on the edge of western Aleppo, said government forces have been preparing for an extended assault.

“Regime forces have several lines of defence protecting Aleppo’s western neighbourhoods. This battle could last several days, or maybe even weeks,” he said.

“They will first try to capture the nearby al-Hikmeh school, which is used by regime forces as a military unity base. They will also try to capture nearby security points, advancing towards Aleppo’s western neighbourhoods.”

The Syrian army confirmed the offensive on state media but said its troops had pushed back rebel fighters from an air force artillery base and denied the rebel alliance had captured the Hikmeh school.

The Britain-based Syrian Observatory for Human Rights (SOHR), which gathers information from a network of local informants, said rebels and pro-government forces were clashing along several fronts on the outskirts of the divided city.

Government forces closed off the last route to the opposition holdout in early July, replicating siege tactics that it has employed with mixed results throughout the war.

Seizing control of Aleppo would be the biggest victory for Syrian President Bashar al-Assad in five years of fighting, and would demonstrate a dramatic shift of fortunes in his favour since Russia joined the war on his side last year, offering crucial air support.

The UN’s special envoy to Syria, Staffan de Mistura, warned on Friday that basic supplies in eastern Aleppo could run out in three weeks.

The Syrian and Russian militaries announced safe corridors for residents who wanted to leave the besieged area on Thursday, but according to the Russian government, only 169 civilians had left by Saturday.

Rights groups have warned it is illegal to deprive civilians of basic necessities, and that residents should not have to choose between leaving their homes or starving.

In southern Syria, an air strike on a hospital in an opposition-controlled town put the facility out of service on Sunday.

The hospital in Jasem was targeted in one of several air strikes to hit the town in Deraa province, located some 50km south of Damascus, according to the Local Coordination Committees activist network.

The group said six people were killed in the strikes, blaming the government.

SOHR said the hospital strike killed a pharmacist and put the facility out of service.

Hospitals are regularly targeted in Syria’s war, drawing condemnation from the UN and rights groups.

The New York-based Physicians for Human Rights says more than 90 percent of attacks on medical facilities in Syria have been carried out by pro-government forces.

“This is just one of many instances where hospitals have been targeted in Syria. And at some point we have to say this is enough and people have to be held to account,” Sanjayan Srikanthan, Deputy Executive Director of the International Rescue Committee, told Al Jazeera.

In the capital, Damascus, Ramzy Ramzy, the UN’s deputy special envoy for Syria, reiterated the UN’s intention to resume talks between the government and the opposition in late August, saying he discussed a political transition process with Foreign Minister Walid Moallem.

The opposition has demanded that Assad step down and whether it will agree to have him stay in power during a transition period or beyond is a key sticking point in negotiations.

READ MORE: Women risk death to give birth in Aleppo

“The minister confirmed the intention of the Syrian government to participate in these talks once they are held,” said Ramzy.

De Mistura was simultaneously meeting with the Iranian deputy foreign minister in Tehran, a close ally of the Damascus government.

In Syria’s north, a US-backed, Kurdish-led fighting force managed to secure control of 40 percent of Manbij, a vital satellite for the Islamic State of Iraq and the Levant (ISIL, also known as ISIS) group’s de facto capital in Raqqa, according to the SOHR.

The latest advance by the Syrian Democratic Forces (SDF) opened the way for some 2,300 additional civilians to evacuate the town, the monitor said.

A spokesman for the SDF, Sherfan Darwish, said between 40,000 and 50,000 civilians have been released from ISIL-controlled areas over the course of the battle for the town, now entering its third month. He said the SDF controlled nearly three-quarters of Manbij.

De Mistura estimated in April that 400,000 people have been killed in the five years of bloody civil war. 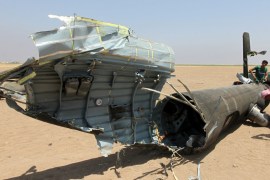 Crew members and officers on board killed after being shot down in rebel-held Idlib province. 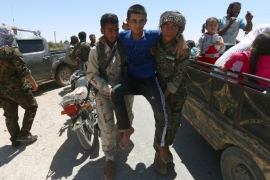 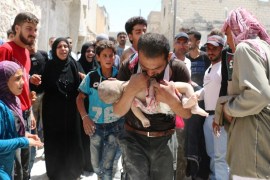 Four hospitals and a local blood bank in the battered city have been hit by air strikes in the past 24 hours. 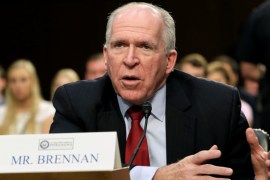 CIA chief not optimistic Syria will remain one country

John Brennan fears it may be impossible to save Syria from partition, amid conflict in which nearly 400,000 have died.