Lul Ruai Koang, a spokesman for Kiir’s forces, told the Associated Press news agency that a convoy of soldiers loyal to former rebel leader Machar opened fire on a checkpoint in Juba manned by troops loyal to the president, killing five.

A spokesman for the vice president’s forces denied that, accusing the president’s troops at the checkpoint of firing on the convoy in the Gudele area of the city, wounding two.

The president and vice president spoke by phone after the incident and agreed “to order their army generals not to escalate the situation”, James Gatdet Dak, a spokesman for Machar, told the Sudan Tribune.

South Sudan erupted into civil war in 2013 when Kiir sacked his deputy Machar barely two years after the country seceded from Sudan.

On Thursday night, people were seen hurrying to their homes, fearful that major fighting could break out in the city as the rival military units deployed in the Gudele area.

“I heard a sound of gunshots and people were running everywhere,” Juba resident Ramdan Kazimiro told the Reuters news agency after the gun battle.

“The military put their cars in the middle of the road coming from Gudele … the whole area is [in] lockdown by the government military,” a second resident, who did not want to be named, said.

The clash comes almost a year after a peace agreement was signed. Tens of thousands of people were killed in the fighting and more than two million were forced to flee their homes.

As part of the deal, Machar returned to his position as vice president and took up residence in Juba after two years hiding out in the countryside.

Troops from both sides have been based in the capital since April. The factions, though, have failed to re-integrate and remain stationed in separate areas of the city, taking orders from their own commanders.

“The danger all along is with so many soldiers in this so-called demilitarised city of Juba that some kind of spark could set the whole thing off,” John Young, a South Sudan expert with the Small Arms Survey research group in Geneva, told the AP.

Earlier on Thursday, mortar and machine-gun fire in the northwestern city of Wau forced hundreds of civilians to flee to a United Nations base for safety, where almost  20,000 people were already sheltering after heavy fighting broke out in the city late last month.

Ellen Margrethe Loj, the UN Special Representative in South Sudan, said that she would travel to Wau – one of the country’s biggest cities – on Saturday to assess the situation.

“I continue to call for an end to violence for the sake of the civilians, who have suffered far too much for far too long,” Loj told the AFP news agency.

Dozens of people have been killed and more than 120,000 forced from their homes because of  renewed fighting in Wau between Kiir’s Sudan People’s Liberation Army (SPLA) and members of the Fertit tribe, which started on June 24. The SPLA is predominantly made up of members of the Dinka tribe, the largest in the country.

The International Crisis Group warned earlier this month that urgent action was required to “prevent the country from returning to full-scale combat”. 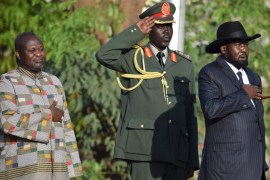 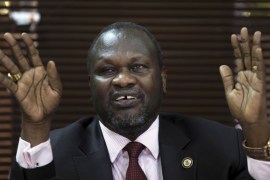