At least two policemen and a female civilian have been killed and nine police officers wounded when bombs were hurled near a huge Eid prayer meeting in northern Bangladesh, officials said.

At least 200,000 people were gathered near a school in the northern Kishoreganj district when the bomb exploded on the premises on Thursday, according to police and local media.

There were exchanges of gunfire at the scene. One of the attackers was shot dead.

“Two policemen, an attacker and a woman who was shot during the gunfight were killed,” national police spokesman AKM Shahidur Rahman told the AFP news agency.

“Nine policemen were also injured. They are in a critical condition and have been shifted to a military hospital in Dhaka.”

Two suspected attackers were arrested, including one who had been shot and injured, while a pistol and machete were recovered from the scene.

“They usually have very good security because they are such large gatherings,” he said. “They are one of the best protected events in the country.”

The incident comes days after 20 hostages were killed – many of them hacked to death – during a 12-hour siege at a popular restaurant in an upmarket suburb of Dhaka.

It was one of the deadliest attacks ever in Bangladesh, where al-Qaeda and the Islamic State of Iraq and the Levant group have made competing claims for a series of killings in the past year.

The government has dismissed those statements and insists that the violence is homegrown. 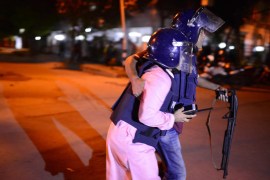