Syrian government troops have made major advances in Aleppo despite a three-day ceasefire announced by Damascus, cutting off the only road in and out of rebel-held areas of the city.

Pro-government troops advanced to within 1km of the strategic Castello Road on Thursday, putting it within range of light weapons and effectively cutting the northern city off from the surrounding countryside.

“If government forces can hold their positions there and fight back the counteroffensive, then the opposition neighbourhoods will be completely besieged,” said Rami Abdel Rahman, head of the Britain-based Syrian Observatory for Human Rights.

Syrian rebels said a push was under way to take back lost positions and secure the strategic road. Up to 300,000 people live in the rebel-held areas of Aleppo.

“They [the regime and its allies] have been hitting the road for a long time, but we haven’t seen fighting like these months,” Aleppo-based journalist Tamer Osman told Al Jazeera. “There has been constant shelling. No one can get in or out of the city now.”

Osman said pro-government troops were battling to take control of al-Mallah Farms and Handaret refugee camp alongside the Castello Road.

“Before, it was possible to pass quickly, but you never knew if a barrel bomb or a shell was going to come down on your head. But now, it’s impossible.”

The government advance came just one day into a 72-hour ceasefire announced by the Syrian army on Wednesday. Government forces, backed by heavy Russian air strikes, have been trying since February to encircle the rebel-held areas of the city.

Aleppo, Syria’s largest city and economic hub before the civil war, has been divided for years into rebel and government held sections.

“All factions sent reinforcements and are trying to take back the positions taken by the regime, but the situation is very bad. There was heavy regime air cover in the night,” an anonymous rebel official told Reuters news agency.

Rebel group Jaish al-Islam (Army of Islam) said four of its fighters were killed during the fighting.

According to the Syrian army, a “terrorist” group had tried to attack army positions in the area, and that its forces had thwarted the assault and taken control over the southern al-Malah Farms alongside the Castello Road.

Syria’s civil war, now in its sixth year, has killed at least 250,000 people, displaced more than 6.6 million inside the country and forced another 4.8 million to flee, many seeking refuge in Europe.

United States Secretary of State John Kerry had welcomed embattled Syrian President Bashar al-Assad’s announcement of a ceasefire on Wednesday, saying discussions were under way to try and extend it.

Last month, Assad’s allies in the Iranian-backed Lebanese group Hezbollah said they would transfer troops to the Aleppo area. The group’s leader Hassan Nasrallah said the defence of Aleppo was tantamount to the defence of Damascus.

Assad and his allies say they are battling the al Qaeda-linked al-Nusra Front in Aleppo – neither group is included in the temporary ceasefire – but rebel groups fighting under the banner of the Free Syrian Army say they are in complete control of the city’s rebel-held areas. 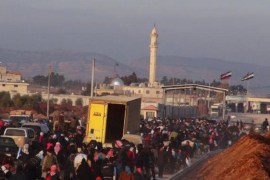 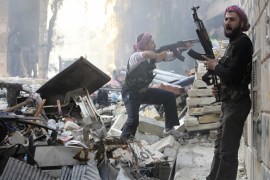