Cambodia’s ruling family has built a vast corporate empire through cronyism and corruption that has allowed Prime Minister Hun Sen to cement his decades-long grip on power, a report released on Thursday by NGO Global Witness says.

Using records obtained from a government database, the report Hostile Takeover shows the Hun family has controlling stakes in companies valued at more than $200m, with a footprint in the country’s most profitable and corrupt sectors and links to international brands including Apple, Nokia, Visa, Unilever, Procter & Gamble, Nestlé, Durex and Honda.

The investigation is the first time evidence hinting at the scale of the family’s finances has been published, and is likely to cover only a fraction of their true business holdings, which the report suggests are masked by nominee owners and shell companies.

“The extent of the Hun family’s private sector holdings, their apparent access to lucrative state resources and their immunity to Cambodia’s legal system, point strongly to the fact that Hun Sen’s Cambodia is built on grand corruption,” the report says.

The revelations come at a time when the Cambodian government is courting foreign investment from the US and EU, and is in the running to join the contentious Trans-Pacific Partnership (TPP) trade pact.

While Hun Sen claims to have no income beyond his prime ministerial salary, the business interests of his wife, children and other close relatives – many of whom hold senior roles in politics, the police, media and the military – help to explain how the family has amassed an estimated net wealth of between $500m and $1bn.

“These revelations point to a cruel irony of Hun Sen’s model of dictatorship – his family has Cambodia’s economy so sewn up that Phnom Penh residents are likely to struggle to avoid lining the pockets of their oppressors multiple times a day,” said Global Witness co-founder Patrick Alley.

Political tensions in the country have been running high in recent months amid a crackdown on dissent that has seen numerous opposition members and several rights workers jailed on questionable charges, prompting condemnation from the international community.

Sam Rainsy, leader of the opposition Cambodia National Rescue Party, who is currently in self-imposed exile in France to avoid what he says are politically motivated defamation charges, dubbed the family’s economic interests “the result of systematic corruption”.

Rather than pursue the most corrupt in society, the country’s Anti-Corruption Unit has instead been designed to “hide government corruption and to target those who do not support the current regime”, he said.

Hun Sen’s immediate family has declared interests in 114 private domestic companies spanning 20 economic sectors. In 90 percent of these, a family member is registered as the chairperson, director or has a shareholding of more than 25 percent. Trading companies, operating in one of the country’s most corrupt sectors, make up the largest share of the firms.

As head of the government, Hun Sen also controls the Commerce Ministry and chairs the Council for the Development of Cambodia, through which large private investments are authorised, while his friend and business associate Kith Meng presides over the Cambodia Chamber of Commerce.

Sebastian Strangio, author of Hun Sen’s Cambodia, said the family’s wealth could be traced to the 1980s, when the ruling party established patron-client ties to “consolidate a state from the ashes of the Khmer Rouge.

“These links were then supercharged during the ‘free market’ reforms and foreign investment boom-times,” after the UN-administered elections of 1993, he said. “Since then, the Hun family and its close allies have been in a prime position to cream off economic rents as the Cambodian economy has expanded.”

Hun Mana, Hun Sen’s eldest daughter and wife of the director of central security, has the most extensive portfolio of anyone in the immediate family, with registered interests in 22 companies and a listed share capital of more than $66m.

The often illicit interests detailed in the report are “far from victimless crimes”, with ramifications for ordinary Cambodians not difficult to find.

In one example cited by Global Witness, between 2009 and 2012 Mana directed WS Mining Industry Holdings, which was granted a 97,000-hectare exploration licence on Kuy indigenous land in northern Cambodia. WS reportedly enlisted soldiers, including members of Hun Sen’s bodyguard unit, to guard the land from local residents, while using cyanide to leach gold from the ground, illegally contaminating the water supply.

Chim Sophal, a 39-year-old Kuy villager, recalled an undiagnosed illness that spread among villagers, which was believed to have been caused by water contaminated by the company’s activities.

While no one has fallen ill in recent years, he said chemicals still leak out from the site during the rainy season, which he fears could cause further “negative effects”.

Sophal also raised concerns about the use of soldiers to guard the site.

“It is not right for state soldiers to safeguard a private company. It is against the laws of the nation,” he said.

In 2010, Hun Sen formalised a sponsorship pact between private companies and the security forces, through which the country’s powerful class of tycoons could fund military and police units in exchange for protection and an on-call labour force for their development projects. Some 100 Hun family-linked firms have since taken part in the scheme.

Despite numerous criminal allegations against their companies, there are no recorded cases of a member of the family being prosecuted for wrongdoing.

Repeated requests by Al Jazeera for comment from aides of Hun Sen and Hun Mana were not answered. WS Mining Industry Holdings was also asked to respond but did not.

One member from the family, Soma Group CEO Sok Puthyvuth – husband of Hun Sen’s youngest daughter and son of Deputy Prime Minister Sok An – told Global Witness he took “seriously the challenge of building a responsible and respected private sector group. I admit it is a work in progress”.

To avoid possible litigation under foreign anti-corruption laws, Global Witness called on potential investors to use the data it obtained to conduct thorough due diligence.

Alley of Global Witness said the wealth of the family comes “at the expense of Cambodian citizens, the majority of whom still live close to the poverty line”.

“This preferential treatment must be brought to an end and the law be applied equally to everyone, even relatives of the prime minister.” 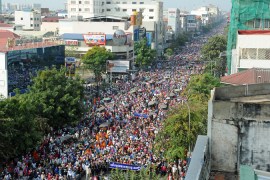 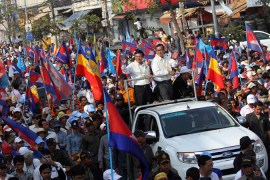 Thousands of Cambodians call on PM to quit