At least 45 people with suspected links to drug trafficking have been killed in four days since Rodrigo Duterte was sworn in as president of the Philippines, according to authorities.

ABS-CBN, the Philippines’ largest TV channel, reported on Monday that at least 29 drug and robbery suspects were killed in Bulacan province, near the capital Manila, since June 30, when Duterte took over the presidency .

Nine other killings were reported in Manila.

Duterte won the election in May on a platform of crushing crime. But his rhetoric has alarmed many who hear echoes of the country’s authoritarian past.

After his oathtaking on Thursday, Duterte said he wanted to get rid of drug traffickers, telling supporters to “go ahead and kill them yourself as getting their parents to do it would be too painful”.

Duterte’s top police commander, Ronald dela Rosa, also told officers accused of drug links that he would not hesitate to change their birthdays to November 2, referring to the Day of the Dead, a major religious holiday in Catholic Philippines.

In Manila, Oscar Albayalde, regional police chief, said five drug dealers were killed on Sunday in a gun battle with police in a shantytown near the Malacanang presidential residence.

“My men were about to serve arrest warrants when shots rang out from one of the houses in the area,” Albayalde told reporters, saying police returned fire and killed five men.

Two other men were shot dead in separate sting operations in the Pasig district.

Two bodies were also found under a well-known Manila bridge on Saturday morning. Their faces were bound with duct tape and their shirts bore signs in Filipino saying “Don’t follow my example. I am a pusher”.

A local reporter posted a photo of the bodies on Facebook.

Elsewhere, at least six alleged drug dealers and a policeman linked to drugs syndicates were killed in six other provinces across the country.

Azadeh Shahshahani, a human rights lawyer who has monitored rights abuses in the Philippines, told Al Jazeera that the killings set a “worrisome trend” in light of the comments issued by Duterte.

“The president and his subordinates should remember that the accused should be afforded a fair process in an independent court of law regardless of the severity of the offence, per well-established principles of international law,” Shahshahani, a director of the US-based group Project South, said.

“The drug menace must stop. Yet the apparent serial summary executions of alleged street-drug users or petty-drug lords, which appear sudden, too contrived and predictable, must also stop,” he said in a statement to the Reuters news agency.

“The two are not incompatible.”

In the northern province of Cagayan, officials said $19.23m worth of drugs from either China or Taiwan were seized on Monday.

The shipment was unloaded at sea and brought to shore by small fishing boats before delivery to Manila’s Chinatown, according to Dela Rosa.

On Sunday, the communist armed group New People’s Army issued a statement supporting Duterte’s all-out war against drugs, saying it might conduct its own drug operations against soldiers, police and local officials.

With reporting by Ted Regencia: @tedregencia 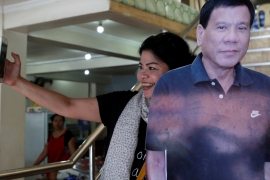 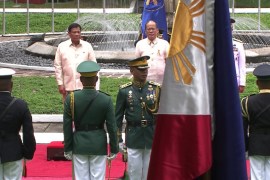 Rodrigo Duterte sworn in as president of Philippines