Donald Trump has been hit with a barrage of criticism for “insulting” the parents of a Muslim American soldier killed while serving with US forces in Iraq.

Trump on Sunday defended his criticism of the bereaved parents of US Army Captain Humayun Khan, who was killed in 2004, by complaining on Twitter that the fallen soldier’s father, Khizr Khan, had “viciously attacked” him in a speech at the Democratic National Convention last week.

“Am I not allowed to respond?” Trump tweeted. “Hillary voted for the Iraq war, not me!”

At the Democratic convention, Khizr Khan told the story of his late son, Humayun, who received a Bronze Star and a Purple Heart, and took Trump to task for threatening to ban Muslims, such as his son, from entering the US, asking if the presidential candidate had ever read the US Constitution.

Trump focused his attack on Khan’s wife, Ghazala, who stood quietly by her husband’s side at the convention last week.

“If you look at his wife, she was standing there. She had nothing to say. She probably, maybe she wasn’t allowed to have anything to say. You tell me,” Trump said, in an interview with ABC’s This Week.

Ghazala Khan responded on Sunday in an opinion piece published in the Washington Post, explaining that even talking about her son’s death 12 years ago was still hard for her.

“Donald Trump said that maybe I wasn’t allowed to say anything. That is not true,” she wrote.

“When Donald Trump is talking about Islam, he is ignorant,” she added.

“If he studied the real Islam and Quran, all the ideas he gets from terrorists would change, because terrorism is a different religion.”

While Hillary Clinton, Trump’s rival for the presidency, defended the Khans on Sunday, so did senior members of the Republican Party, including Senate Majority Leader Mitch McConnell, who called the late Captain Khan “an American hero”.

McConnell said he agreed with the Khan family than banning people from entering the US based on their religion was contrary to American values. On Twitter, Republican strategist Ana Navarro called Trump’s comments about the Khans “gross” and labelled him a “jerk”.

Clinton said Trump had repaid a family that made the “ultimate sacrifice” with “nothing but insults” and “degrading comments about Muslims”.

“I do tremble before those who would scapegoat other Americans, who would insult people because of their religion, their ethnicity, their disability,” she told parishioners in a Cleveland church on Sunday morning.

Al Jazeera’s Rob Reynolds, reporting from Washington DC, said for any other presidential candidate such a controversy could be a campaign changer. But not in Trump’s case.

“Normally, I would say that a presidential candidate who attacks or disparages the parents of a heroic soldier who died in the line of duty would lose a lot of votes, and that may be the case here,” Reynolds said.

“But it’s certainly not going to drive Donald Trump to discard the nomination, he is the nominee. It may change some minds of people who may be leaning one way or the other…certainly there is a core of support for Donald Trump, which is not going to be dissuaded from voting for him by this particular incident.” 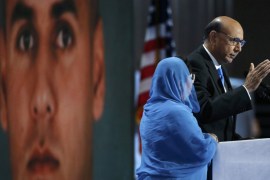 Republican presidential nominee suggests Khizr Khan may not have written his speech at the Democratic convention.

Khizr Khan to Trump: Have you read the constitution? 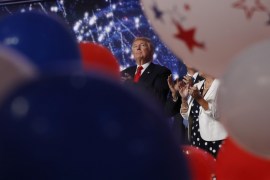 Welcome to the Trump show

Whichever way the political pendulum swings in the US, the rest of the world will be reduced to absorbed bystanders.