Armenian police have exchanged gunfire with an armed pro-opposition group holding hostages for a twelfth day and clashed with thousands of protesters supporting the hostage-takers.

Several protesters on Friday were wounded in the skirmishes near the police building in Yerevan, Armenia’s capital, where the hostages have been held since July 17.

The wounded were taken away in ambulances as police broke up the demonstration, showed a live video from the scene.

Radio Liberty, a US-funded broadcaster, said police beat some of its journalists with truncheons and damaged their equipment.

Three of the armed men were wounded during an earlier shootout on Friday, with two taken to hospital under armed guard, Ashot Aharonyan, police spokesperson, wrote on Facebook.

Nicknamed Lone Wolf, Araik Handonyan, one of the armed men, was wounded in the leg but refused to go to hospital, Aharonyan said.

Gunfire echoed around the police building throughout the evening.

Police armed with shields and truncheons deployed smoke and sound bombs against the protesters who chanted “Free independent Armenia!” and “Serzh, leave!” referring to President Serzh Sarkisian, who has led the country since 2008.

They have since released all the police but on Wednesday took four medical staff hostage who entered the compound to treat wounded armed men.

One of the medics has since been released, while 24 armed men are still inside with three medics.

Sefilyan – the leader of a small opposition group named the New Armenia Public Salvation Front – and six of his supporters were arrested in June accused of preparing to seize government buildings and telecoms facilities in Yerevan.

The fierce government critic was previously arrested in 2006 after calling for “a violent overthrow of the government” and jailed for 18 months.

“People will resort to violence when they feel the system has failed them,” Maria Titizian, a Yerevan-based journalist, told Al Jazeera.

Titizian said the violence used by security forces on the protesters and vice-versa “doesn’t serve justice or in the building pillars of democracy”.

At least 30 civilians and as many police officers were injured in the clashes, Titzian said.

Last week, Zara Hovhannisyan, a human-rights activist, told Al Jazeera many protesters were beaten and held without food and water for hours after being taken to police regiments not designed as detention centres.

The US embassy in Yerevan in a statement said it was “deeply troubled by the ongoing hostage situation”.

It called for “the immediate, safe, and unconditional release of medical personnel held captive since Wednesday, and any others who may wish to leave the police building”. 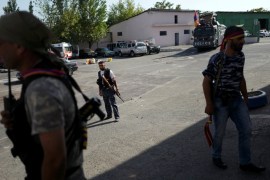 Police say gunmen who have been barricaded in a police station for 10 days have taken an ambulance crew hostage. 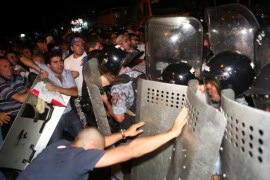 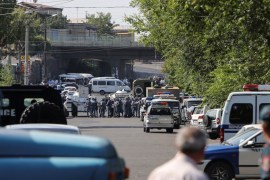