The UN has criticised an agreement signed by Yemen’s Houthi rebels and ousted president Ali Abdullah Saleh’s party to form a political council to run the country.

Farhan Haq, spokesman of UN Secretary-General Ban Ki-moon, said on Thursday the “unilateral” decision was not in line with the peace process and endangered “the substantial progress made during the Kuwait talks.

“It is a clear violation of the Yemeni constitution and the provisions of the GCC [Gulf Cooperation Council] initiatives and implementation mechanism,” Haq added.

The agreement was struck earlier on Thursday between Saleh’s General Peoples’ Congress Party (GPC) and Ansar Allah, the political arm of the rebel Houthi movement.

The proposed council would include 10 members – five from each side.

Yemen has been torn apart by conflict since 2014, when Houthi rebels, allied with troops loyal to Saleh, captured large swaths of the country, including the capital, Sanaa.

In a statement published on Yemen’s Houthi-run SABA news, the parties who signed the deal said “the insolence of the Saudi assault and its coalition in continuing to kill our people and destroy public and private properties” motivated the agreement.

It said the deal was signed by GPC deputy head Sadeq Abu Ras and the Houthis’ Ansar Allah political council chief, Saleh al-Samad, and outlined a basis for running the country and managing state affairs on the basis of the existing constitution.

The statement also said the agreement would entail a rotating leadership, including a president and a deputy from each ally.

The talks under way in Kuwait have made little progress on UN peace proposals, which include a Houthi withdrawal from cities captured since 2014 and the creation of an inclusive, more democratic government.

Exiled President Abd-Rabbu Mansour Hadi demands the implementation of the UN security council resolution which stipulates the withdrawal of armed groups from all cities. The Houthis demand a share of power in any new government.

Responding to the formation of the 10-member council, Yemen’s government said on Thursday the peace “negotiations have completely ended”.

“We have participated and exercised patience for the sake of our people and we end the negotiations for their sake,”  Abdullah al-Olaimi, deputy director of the Yemeni president’s office and a member of the government team to the UN-brokered talks being held in Kuwait, said on his Twitter account.

In Riyadh, Saudi Arabia, Hadi’s government said the rebels had “fired the bullet of mercy”, killing off the talks. 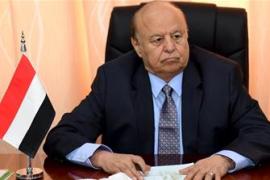 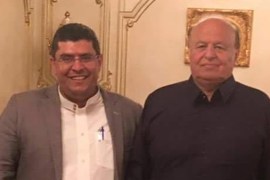