Up to one million Iraqis risk facing displacement in the coming weeks as fighting intensifies ahead of a government offensive to retake the northern city of Mosul from ISIL, according to the International Committee of the Red Cross (ICRC).

“The situation is unpredictable but we must prepare for the worst,” Robert Mardini, the ICRC’s regional director for the Near and Middle East, said in a statement on Friday.

“Hundreds of thousands of people may very well be on the move in the coming weeks and months, seeking shelter and assistance. We need to be ready.”

READ MORE: Iraq humanitarian crisis ‘one of the world’s worst’

Following the  recapture of Fallujah  last month, Iraqi forces are currently conducting operations aimed at setting the stage for an assault on Mosul, which has been held by the Islamic State of Iraq and the Levant (also known as ISIS) armed group since June 2014.

Mosul was once home to some two million people, but the current population has been estimated at around half that figure, with the number of those fleeing their homes increasing.

More than 3,000 people were forced from their homes this week in Shirqat, south of Mosul, as Iraqi forces retook territory near Mosul.

According to the UN, approximately 10 million Iraqis are in need of humanitarian assistance, with 3.3 million already displaced from their homes within the country.

The operation to retake the far smaller city of Fallujah, located much closer to the capital Baghdad, forced tens of thousands of Iraqis to flee, leaving the aid community overwhelmed and many people in challenging humanitarian conditions.

The scale of displacement as Iraqi forces fight to retake Mosul is expected to be much larger.

Overall, some 2.6 million Iraqis have fled the country since the beginning of the crisis in January 2014 when ISIL overran large swaths of the country, according to UN figures.

Additionally, more than one million Iraqis fled the country between 2006 and 2008 owing to growing violence following the US-led invasion and occupation in 2003.

Iraqi government forces, backed by US-led coalition air strikes and advisers, have managed to regain some of the territory seized by ISIL. However, the group still controls vast areas of northern and western Iraq. 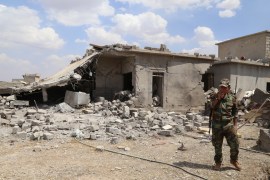