Approximately 740 Palestinians, including 384 children, were made homeless during the first six months of 2016 after the Israeli military tore down their housing structures in the occupied West Bank, according to new figures.

In a report published on Wednesday, Israeli human rights organisation B’Tselem said 168 Palestinian homes were demolished across Area C between January 1 and June 30 – more than in all of 2015.

The figures do not count multiple demolitions of the same housing unit.

Area C, which comprises 60 percent of the West Bank and is home to about 300,000 Palestinians, is under full Israeli military, security and administrative control.

Separate B’Tselem data looking at demolitions over the past decade showed that most of the destruction was carried out in small, underprivileged communities far from the city centres, in areas such as the South Hebron Hills and the Jordan Valley.

“They target Palestinian areas that are sparsely populated, as the people there do not have political clout,” B’Tselem spokesperson Sarit Michaeli told Al Jazeera.

“Israeli authorities want them to move into Area B in order to use Area C for settlement expansion. That’s the crux of the issue.”

Area B, comprising about 22 percent of the West Bank, is under Israeli security control, while the Palestinian Authority runs civil affairs.

While tenants may be previously aware of a demolition order, Michaeli says Palestinians are not informed when their housing structure will be demolished.

Israeli authorities justify home demolitions by claiming such structures were built without permits.

“Since the construction of these buildings has not been approved by the relevant authorities, enforcement measures were taken against them,” a spokesperson for the Civil Administration, Israel’s military governing body in the West Bank, told Al Jazeera.

Palestinians have repeatedly said their building permit requests are rejected or unanswered.

UN figures published last year showed that Israeli authorities approved just 1.5 percent of all requests for building permits submitted by Palestinians between 2010 and 2014.

According to B’Tselem, demolitions are taking place “under flimsy pretexts such as ‘illegal construction’ – a spurious claim given the absence of any real possibility for Palestinians to build legally in the area”.

“This governmental policy, implemented systematically for years, constitutes the forced transfer of protected Palestinian residents within the occupied territory, in breach of international humanitarian law,” the group’s report said.

Israel occupied the West Bank after the 1967 Arab-Israeli War. Since then, Israel has built 125 Jewish-only housing settlements – considered illegal under international law – across Area C, according to B’Tselem figures.

More than half a million Jewish Israelis live in such settlements, with further plans to expand them.

“Territorial expansion and annexation remain at the core of the Zionist project and demolishing houses is one of the tools it uses,” Tartir told Al Jazeera from Geneva, Switzerland. 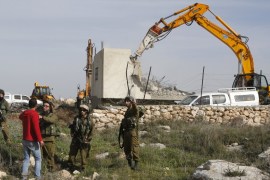