The Islamic State of Iraq and the Levant (ISIL, also known as ISIS) has released a video that purportedly shows the two men who killed a priest in a French church pledging allegiance to the armed group.

The footage, which was posted on Wednesday on the ISIL-linked website Amaq, appears to show two young men naming themselves as “Abu Omar” and “Abu Jalil al-Hanafi” and reciting a pledge of allegiance to ISIL leader Abu Bakr al-Baghdadi.

One of them is holding a piece of paper upon which the ISIL flag is printed.

Both attackers were later shot dead by French police. One of the hostages was reportedly critically wounded at the scene, while the other three hostages made it out unharmed.

Al Jazeera’s Natacha Butler, reporting from France on Tuesday, said the two assailants entered the church during a morning service.

Molins added that the two attackers had knives and fake explosives, including a phony suicide belt covered in tin foil.

Kermiche had reportedly been put under surveillance after two failed attempts to reach Syria last year.

“We are put to the test yet again,” Hollande said. “The threat remains very high”.

France has been on high alert after an attack in the southern city of Nice that killed 84 people on July 15.

The country is in a state of emergency, showing a boost in visible police presence, following a string of ISIL-claimed attacks in recent months.

Security measures have been extended four times since assailants, who pledged allegiance to ISIL, struck Paris in November, killing 130 people at restaurants, a concert hall and outside a football stadium. 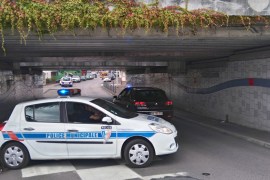 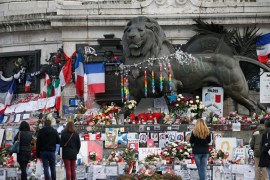