Several people have been killed when a mortar bomb hit a restaurant in the government-controlled ancient quarter of the Syrian capital Damascus on Sunday, a monitor and a witness said.

The Britain-based Syrian Observatory for Human Rights said dozens were wounded in the attack. A witness told Reuters news agency that there were at least six dead in the restaurant in the Bab Touma district of Damascus.

Mortar attacks on government-controlled areas of Damascus from rebel-held areas just outside it are relatively rare.

Images posted to social media, which Al Jazeera was unable to independently verify, showed pools of blood on the floor of the restaurant, which was damaged heavily by the blast.

The attack came amid increased violence in Aleppo, Syria’s largest city in the country’s north.

Syrian government air strikes there put four makeshift hospitals and a local blood bank out of action in the past 24 hours, according to local rescue workers and a monitor. 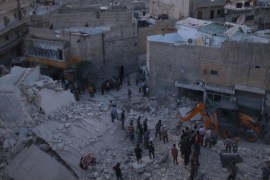 Dozens killed in Aleppo air strikes as regime forces cross into Raqqa province for the first time since August 2014. 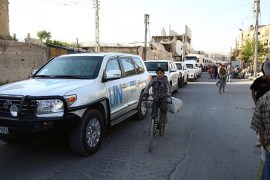 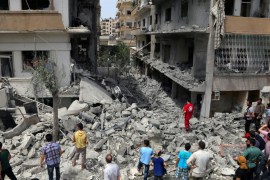