Machar fled the capital, Juba, last week after a new outbreak of violence threatened to send the young country back to all-out civil war.

On Thursday, Machar was given a Saturday afternoon deadlineby President Salva Kiir to return to Juba and work together towards rebuilding peace – the two had signed a peace agreement late last year under which Machar was once again made vice president.

But with Machar still missing, his party convened on Saturday in Juba and came up with a resolution to replace him with Deng, who is now set to become acting first vice president.

But Nyarji Roman, a spokesman close to Machar who is also in hiding, said the move was a “conspiracy” to overthrow Machar, who has reportedly dismissed Deng.

Al Jazeera spoke to Deng, who was in Juba, by phone. Here is what he had to say about the leadership crisis in South Sudan.

Al Jazeera: You have now replaced Machar, the man who dismissed you. His response has been that the peace process is now illegal. Can you tell us more about what is happening in Juba and what the government intends to do now?

Taban Deng Gai: I’m not aware of Machar dismissing me. Machar is in the bush. I don’t know where he is. Dismissing any member of the SPLM-in-Opposition is a process; a process that [requires] placing the charges against me and investigating me through a committee, and after that you can have the outcome of the investigation.

What I have done in Juba with my colleagues is that we are committed to the full implementation of this peace [deal]. The country needs peace, reconciliation, stability, so that we move forward. Machar cannot dismiss me because I’m supporting peace.

What I’m doing now is that, after having been appointed as the chairman and commander-in-chief of the SPLM-in-Opposition, I will send this resolution to the president of the republic and ask him to release Machar and appoint me in his place, so that I work with the president and with the transitional government of national unity to reconcile the nation to move forward. That is simply what I am going to do.

Al Jazeera: But others are saying that the implementation of the peace process has been significantly complicated by your appointment because Machar had previously dismissed you.

Deng: Machar did not dismiss me. Dismissal is not just taking a paper and pen and then you announce that I’m dismissed. After all, I’ve not even seen a signed document by Machar dismissing me.

What is going to happen is that we are following the article of the agreement; Article 6.4 says that in the event that the first vice-president cannot take charge of his responsibilities, a new appointee in his place must be appointed and take charge.

Machar, where he is, he cannot take charge of his responsibilities. The country needs peace.

Al Jazeera: Some say that the reason he’s not around is because he is very worried about his safety right now. He has received no guarantee from the government that he would be safe if he were to return. Should they not do more to reassure him about his safety?

Deng: This is not the issue now. The issue is that the post of the first vice-president is vacant, and the law says that somebody from IO must be nominated for the post.

Whether Machar comes back tomorrow, and we are ready to sit with him as IO, if he’s ready to come back to Juba and continue with the implementation – that will be a new case. But as of now, the post is vacant. We need these things to go forward.

The president needs a partner and he cannot work in a vacuum. The first vice-president is not here, he is not in Juba, he cannot take charge of his responsibility. 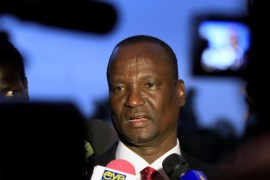 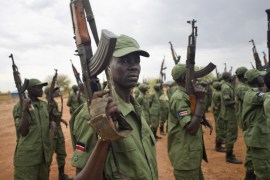 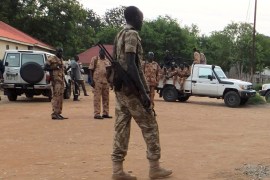