As his home city of Aleppo continued to wane at the hands of the five-year-civil war, Khaled Akil wondered what it would be like to hunt for the Pokémon characters amid the rubble in Syria.

In the Syrian artist’s latest project, a series of photos from AFP posted to his website show the catchable monsters amid scenes of despair.

The project is titled, “Pokémon Go In Syria – Part 1″. The result is eerie.

The animated figures watch on in the aftermath of a bomb blast; stare into the camera as a child walks between crumbled buildings; creep out from a burst pipe as young boys swim in dirty water and squat atop a tank with fighters from the Islamic State of Iraq and the Levant (ISIL, also known as ISIS) group.

“Being an avid follower of news and global social trends, I found this unnerving contradiction between the playfulness of the Pokémon world and the danger which Syrians and Syrian children live through every day,” he told Al Jazeera.

“I wondered what it would be like to hunt for a Pokémon character among the rubble in Syria, and how a virtual game attracts more attention than the atrocities committed daily in real-life Syria.”

The artwork, he added, is not meant to point fingers but rather highlight the crisis.

“This project is not to blame people for not paying attention for Syria at all, it is just a spotlight on what is happening there.”

Born in Aleppo, 30-year-old Akil travelled to Istanbul in 2012 to attend his solo exhibition, but was forced to stay in the Turkish city as the war at home escalated.

Many of his family members still live in Syria and refuse to leave.

“They are there on the hope that the war will someday end and they will be there to welcome us, the ones who fled,” he said.

In a recent article for the New York Times, Akil wrote about the woes of now trying to travel as a Syrian – he was rejected entry to the US to attend an art event because “there was war in my country”.

“After five years, sadly I think what going on in Syria is a proxy war, and it’s like a game for some very evil players,” he said of his recent work, to Al Jazeera.

“Unfortunately, and like any other war, after a while people grow either bored, or too used to the news of death and destruction, and they get on with their lives. This might ultimately be a gentle reminder-poke, excuse the pun.”

Like millions of others of Syrians, he has one simple dream: that the streets of his home city are peaceful once again.

“While the [Pokémon] game is largely successful, I truly wish I can stroll down the streets of Aleppo without a phone nor a Pokemon, just me and the once-beautiful city,” he said.

The Syrian civil war has claimed more than 250,000 lives and displaced millions, with most taking refuge in Turkey, Lebanon and Jordan.

An activist-led project has also played on the Pokémon phenomenon in Syria. In recent days, photos with children holding up posters with the colourful characters are adorned with the #PokémonInSyria hashtag.

The free-to-play game, which was released on July 6 and has swept the gaming world, has added billions of dollars to the value of Nintendo – which owns a large stake. 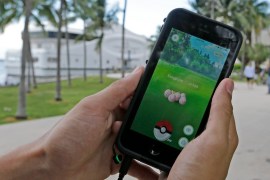 Mobile gamers are taking to the augmented reality game, but political and religious authorities are voicing concerns.