A mob has burned down a mosque in northern Myanmar – the second such attack in just over a week in the predominantly Buddhist nation.

The state-owned Global New Light of Myanmar newspaper reported on Saturday that security forces in Hpakant, in Kachin state, were unable to stop the attackers.

It said the attack on Friday came after mosque authorities failed to meet a June 30 deadline to tear down the structure to make way for a bridge.

No arrests were made, the newspaper said.

In a separate incident, a mob on June 23 demolished a mosque in Bago Region, about 60km northeast of the capital Yangon.

There has been sporadic but fierce violence against Muslims in predominantly Buddhist Myanmar since rioting in 2012 forced more than 100,000 members of the Muslim Rohingya minority to flee their homes in western Rakhine State.

A local NGO worker who visited the town on Saturday told the AFP news agency that security forces had been deployed to maintain order.

“Police are now controlling the area and it is stable,” said Dashi Naw Lawn, from the Kachin Network Development Foundation.

Tensions have also been running high in western Rakhine, a state scarred by deadly riots in 2012 that left communities almost completely divided along religious lines.

The region is home to the stateless Rohingya, a minority largely relegated to destitute displacement camps and subject to a host of restrictions on their movements and access to basic services.

Aung San Suu Kyi, a veteran democracy activist who championed her country’s struggle against repressive military rulers and now holds the office of state counsellor, has drawn criticism from rights groups for not taking swifter moves to carve out a solution for the ethnic minority.

Her government recently ordered officials to refer to the group as “people who believe in Islam in Rakhine State” instead of Rohingya – a term whose use has set off protests by hardliners, who insist the group are illegal immigrants from Bangladesh. 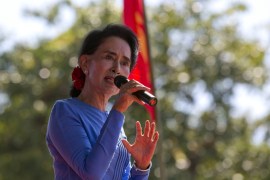 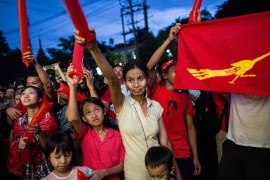 Despite a historic election promising change, Muslims in Myanmar feel threatened and excluded. 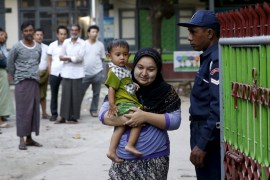 Mandalay court convicts 12 men for alleged links to armed group, whose real existence has been called into question.