The explosions on Monday morning targeted checkpoints in the east and west of the port city, a former stronghold of the local al-Qaeda affiliate, al-Qaeda in the Arabian Peninsula [AQAP].

General Faraj Salemine confirmed the attacks to the AFP news agency, saying “terrorists” had killed at least five soldiers. Other reports said that at least nine had been killed.

The capital of Hadramaout province, Mukalla had been under the control of AQAP for one year until pro-government troops backed by a Saudi-led coalition recaptured it in April.

Yemen has been gripped by a devastating conflict that escalated in March last year when the coalition began air strikes against Iran-backed Houthi rebels after northern and central parts of the country, including the capital, Sanaa, were seized.

The fighting has caused a security vacuum that has allowed groups such as al-Qaeda and the Islamic State of Iraq and the Levant (ISIL, also known as ISIL) to extend their influence and attack security forces.

Last month, ISIL claimed a wave of suicide bombings aimed at Yemeni troops in Mukalla that killed at least 38 people.

The Pentagon said in May that a “very small number” of US military personnel had been deployed around Mukalla to support pro-government forces.

The conflict has killed more than 6,400 people and displaced 2.8 million since March last year. 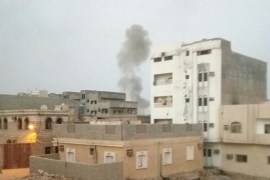 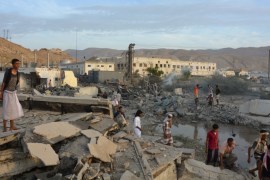 Yemeni troops killed 13 fighters in a raid outside the city of Mukalla, which was ruled by al-Qaeda until last month. 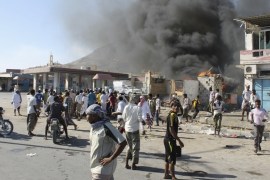