Cleveland, Ohio – Protesters have lambasted what they called US presidential candidate Donald Trump’s bigotry and xenophobia in rallies held on the first day of the Republican National Convention.

Under the watchful eye of police officers on horseback and bicycles, groups with different interests, united in their message against the celebrity tycoon, marched on Monday in the Cleveland area outside the security parameter where the convention was being held under tight guard.

“People have already begun arriving from as far as Florida, and we expect to have a large family friendly protest that is truly national in scope,” said protester Mick Kelly, as demonstrators nearby chanted “Dump Trump”.

“There is a lot of anger at the bigot,” Kelly added.

Approximately a third of Cleveland’s police officers are assigned to man the convention area, and approximately 2,500 others from other areas were brought in to help, as the city expects 50,000 visitors.

Republican delegates attending the convention to officially nominate Trump as their nominee for president should realise that there’s “another America with a different message against the hate and fear that Trump is spreading”, said Tom Burke, spokesman for The Coalition to Stop Trump and March on the RNC – a bloc of 40 groups.

“We are hoping to impact the election and build a movement that will outlast the elections to oppose racism, to oppose anti-immigration and to stand up for Muslims and other religious minorities in this country,” he told Al Jazeera.

Throughout his campaign, Trump has raised the ire of many Americans with controversial statements; he declared he would build a wall at the border with Mexico to prevent immigrants from entering the country irregularly and proposed to ban Muslims from entering the US.

The former reality TV star made his incendiary proposals against Muslims, from banning to scrutinising them, a pillar of his campaign.

Since the Paris, San Bernardino, Orlando and Nice attacks, Trump has sought to cast himself as tough on national security and able to address the issue of “terrorism”.

In Cleveland, members of the Muslim community gathered to denounce Trump’s rhetoric, which some said “was dividing American in two”.

“We are beginning to look like two Americas,” said Julia Shearson, executive director of The Council on American-Islamic Relations (CAIR) in Cleveland.

“A great leader should not seek to solve problems by offering false problems and evading the truth. Scapegoating the Muslim community will not solve our nation’s problems. Muslims are part of the solution.”

Members of the Muslim group distributed ‘Islamophobin,’ a chewing gum designed as fake medicine to cure blind intolerance, and irrational fear of Muslims. A warning on the package says that ‘Islamophobin’ “may result in peaceful coexistence”.

“He lied about Muslims celebrating the events of 9/11. We are asking RNC members: what actions will this lead us towards as a nation? These proposals will lead us anywhere. They do not make us any safer.” 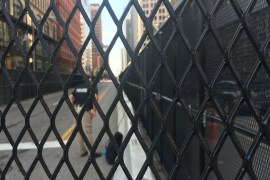 Cleveland braces for protests ahead of GOP convention

Security tightens as open-carry gun advocates and rival groups expected to rally outside the Republic convention. 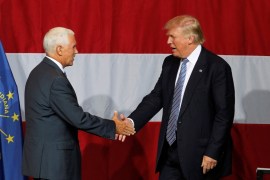 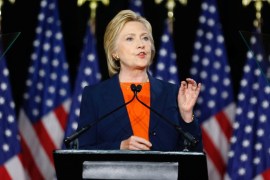