Authorities in Armenia called on gunmen holed up in a police station in the capital Yerevan for a second day to lay down their arms on Monday and release four people they were holding hostage.

The gunmen seized the police station and hostages on Sunday, killing one police officer and wounding two others in the process before demanding Armenians take to the streets to secure the release of jailed opposition politicians.

The attackers released two hostages on Sunday and three more on Monday, the security service said. Negotiations to end the situation peacefully were under way on Monday evening local time.

The hostage takers’ main demand is to free Jirair Sefilian, an opposition leader whom the authorities have accused of plotting civil unrest. Sefilian was jailed in June over allegations of illegally possessing weapons.

The security service said talks were deadlocked so far.

“The armed group is refusing to release other hostages, including high-ranking officials, to lay down their weapons, or to surrender,” the National Security Service said in a statement, adding that the group posed a direct threat to society.

“Law enforcement agencies are doing everything they can to end this peacefully, but in the circumstances it might not be enough,” it said.

“That’s why we again appeal to the members of the armed group … to end their armed resistance. For now, there is still time and the opportunity to do that.” 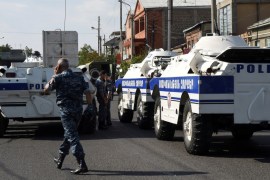 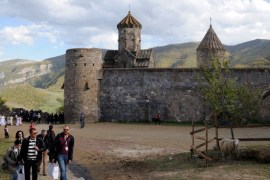 Armenia as a bridge to Iran? Russia won’t like it

No matter how attractive Armenia might be as a bridge for re-engaging Iran, the real obstacle is Russia. 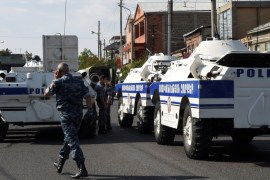 The violent act of hostage-taking is a manifestation of significant discontent within Armenia.