It was a major display of solidarity when Turkish MPs from all four major political parties gathered at the damaged parliament only hours after a coup attempt failed to overthrow the government overnight on Friday.

At an extraordinary parliament session early on Saturday, a joint declaration was issued by the ruling Justice and Development (AK) Party, the main opposition Republican People’s Party (CHP), the People’s Democratic Party (HDP) and the Nationalist Movement Party (MHP), “strongly condemning the coup attempt” that resulted in the detention of thousands.

The statement said Turkey’s handling of “the bloody coup attempt sets an example for the whole world.”

“This noble nation, which has protected the Republic of Turkey and its institutions at the risk of their lives, deserves to be praised and lauded,” it added.

At least 290 people died and thousands of civilian and military state employees were detained after rebel soldiers attempted to use tanks, fighter jets and attack helicopters to overthrow the government overnight on Friday, killing civilians and security forces.

However, in the early hours on Saturday, dozens of soldiers involved in the coup surrendered in various parts of Turkey after their attempt failed.

Sezgin Tanrikulu, an MP with the main opposition party CHP, told Al Jazeera that the attempt to overthrow the government failed because of a combined stance by all of the country’s political parties, the civil society, the public and the media against the coup.

“Now the priority for our country should be to eliminate this mentality of coup that still exists in the minds of some people in military and civilian institutions,” he told Al Jazeera.

Oktay Vural, a senior MP with the right-wing MHP, told Al Jazeera that weapons have no part in politics, and that the whole nation played a big role in quashing the attempt.

“Coups or terrorist organisations or any other attempt to bring violence into the political arena is fundamentally rejected by our party,” he said.

President Recep Tayyip Erdogan and his ruling AK Party blame exiled Muslim religious leader Fethullah Gulen and his supporters for orchestrating the attempted coup and demand that the US extradite him.

Erdogan says Gulen supporters within the bureaucracy are running a “parallel state”, and trying to undermine the democratically elected government and the parliament.

Since the attempted coup, the government has cracked down on suspected backers of the plan to topple the civilian government. As of Sunday night, 6,000 people were arrested over alleged involvement in the failed coup.

The unity of all opposition parties in the face of the attempted coup was a rarity in a country famous for its tense political scene, and highly polarised cultural and ideological lines.

Despite the fact that the opposition parties have expressed full support of the civilian government and democracy, they have also urged the government and Erdogan to enhance Turkey’s democratic standards.

“This is a wake-up call to make some changes in Turkey,” MHP’s Vural said.

“Even before the coup, we have warned the government about problems with Turkey’s democracy and the rule of law in the country,” he told Al Jazeera.

“We need to assure the separation of powers in Turkey, media freedom and independence of the judiciary through structural changes. The government should learn from what happened.”

Erdogan is loyally supported by millions of Turks, who mostly admire him for being a pious Muslim, but also for raising their living standards and establishing economic stability.

The AK Party took over an economy suffering from inflation and high unemployment in 2002, and transformed it to a steady one by pushing growth through trade and foreign investment.

However, Turkey’s social divisions have grown during the rule of the AK Party, and critics blame Erdogan for trying to grab more power through legal manoeuvres.

He has never hid the fact that he would like to see a presidential system similar to the US – which would undoubtedly strengthen his hand – in Turkey.

CHP’s Tanrikulu told Al Jazeera that Erdogan has a choice to make on which direction he wants to take the country.

“The channels of democracy should always be open and polarising politics that we experience in Turkey recently should be given up. We should seek to establish a harmony in the society,” he said.

“Erdogan has two choices ahead: He can start anew by using this coup attempt to bring the society together, and strengthen liberal democratic institutions, freedoms and the rule of law. He can stop pressuring the media and ignoring the opposition,” he told Al Jazeera.

Or he can chase his authoritarian ambitions and work to enhance his power, eroding Turkey’s democratic institutions further, Tanrikulu said. 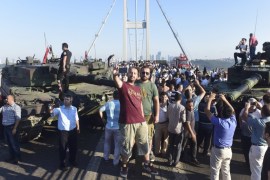 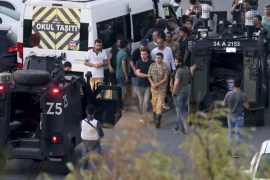 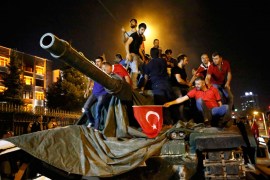