Nazareth, Israel – The Israeli government stands accused of waging a campaign of incitement against human rights groups as it tries to hamper efforts by the international community to monitor abuses of Palestinians under occupation.

A so-called Transparency Law, passed by the Israeli parliament last week, compels some two dozen Israeli rights organisations to declare publicly that they receive a majority of their funding from foreign governments.

In future, they will have to divulge such funding – mostly from individual European states or the European Union – every time they appear in the media, issue publicity material, make statements online, and deal with official bodies. Failure to do so will incur a substantial fine.

The legislation’s aim, peace activists argue, is to vilify these groups with the Israeli public, suggesting they are “foreign agents” and “traitors” seeking to subvert Israel’s security and its national interests.

Jeff Halper, founder of the Israeli Committee Against House Demolitions, said the human rights community was being “publicly shamed.

“The government wants these groups to be seen as disloyal and anti-Israel. It is about cementing a public consensus that they constitute an enemy within,” he told Al Jazeera.

Most of the affected groups work in the occupied territories, monitoring human rights violations, the expansion of settlements, torture of Palestinian prisoners and Israel’s military courts system. The best-known include B’Tselem, Peace Now and Yesh Din.

But the law also applies to social justice groups operating inside Israel. Most focus on structural discrimination against the country’s Palestinian minority, a fifth of the Israeli population.

The international media and the diplomatic community draw heavily on research done by these groups when criticising Israel’s treatment of Palestinians.

Ayelet Shaked, the justice minister who sponsored the law, originally justified it on the grounds that it would help to “limit the information that gets to foreign countries”.

Human rights groups are now the last voices in Israeli Jewish society opposing the occupation and criticising government policy. And they are in danger of being silenced.

Last week, Prime Minister Benjamin Netanyahu echoed those concerns. He said the Transparency Law was necessary “to prevent an absurd situation, in which foreign states meddle in Israel’s internal affairs by funding NGOs without the Israeli public being aware of it”.

Peace groups point out that the legislation has been crafted to target them alone, and not Israel’s hundreds of other civil society groups – officially known as non-governmental organisations (NGOs).

Dozens of right-wing and settler organisations are also financed from abroad but will be exempt from the law because their donors are wealthy private individuals and foundations rather governments.

Lifting the veil of secrecy that surrounds the funding of settler groups has proved difficult. However, a recent investigation by the Haaretz daily found that over a four-year period, American donors channelled at least $220m in tax-deductible payments to settler NGOs.

The late Irving Moskowitz, a casino magnate, and the Christian evangelical preacher John Hagee are among those known to have pumped millions into settlement projects.

Critics have noted that, despite Netanyahu’s stated concerns about foreign “meddling”, all of his past campaign contributions have come from overseas sources.

Netanyahu has also not objected to Sheldon Adelson, a US billionaire, sinking tens of millions of dollars into printing the loss-making free daily Israel Hayom. The country’s biggest-circulation newspaper, it fervently supports Netanyahu and his government.

The ruling coalition rejected attempts by the opposition to amend the Transparency Law to include settler organisations. Opposition leader Isaac Herzog told reporters the legislation was “indicative, more than anything, of the budding fascism creeping into Israeli society”.

Yousef Jabareen, a legislator for the Arab-dominated Joint List party, told Al Jazeera that data he requested last month from the Israeli parliament’s research department showed that there was no equivalent law in any western state. “Human rights groups are now the last voices in Israeli Jewish society opposing the occupation and criticising government policy. And they are in danger of being silenced,” he said.

Last month, several faction heads in the European Parliament warned that the Transparency Law would contribute to incitement against Israel’s human rights community and increase the possibility of death threats and physical assaults.

Nadeem Shehadeh, a lawyer with Adalah, a legal centre for Israel’s Palestinian minority, told Al Jazeera the law would also have a “chilling effect”, making organisations more reluctant to go public with their findings for fear of inadvertently violating transparency requirements and incurring heavy fines as a result.

Jabareen said the path to the new law was paved by right-wing and settler groups with close ties to the Netanyahu government. Over the past year, they have been aggressively promoting the idea that human rights activity is “treasonous”.

That view was expressed most graphically last year in a video created by the publicly funded Samaria Settlers’ Committee. The short animated film presented Israeli groups that accept European funding as the modern equivalent of Jews who collaborated with the Nazis.

Im Tirtzu, an ultra-nationalist youth movement supported by several government ministers, followed up with an ad campaign last December calling human rights groups “moles”. In one video, the faces of four leading activists were shown over the slogan: “While we fight terror, they fight us.”

Ad Kan, a settler group, added to the hostile public atmosphere by infiltrating anti-occupation groups to secretly film meetings. Despite little of substance, hype from right-wing politicians and the Israeli media has reinforced the impression that the organisations are conspiring with foreign governments to harm Israel.

Last month, Im Tirtzu entered the fray again, presenting a report to legislators that it claimed proved human rights groups “directly operate against Israel and [Israeli] soldiers, and even go so far as to defend terrorists“.

The most prominent of the groups to have been targeted is Breaking the Silence, which collects testimonies from soldiers of abuses of Palestinians they have witnessed. Last year, Moshe Ya’alon, then defence minister, barred the group from any contact with the military and accused its members of being “traitors”.

Indications are that such shaming is gaining traction, even in places that were once considered bastions of free speech and liberalism.

In an unprecedented move, Rivka Carmi, the vice-chancellor of Ben Gurion University, overruled her Middle East department last month after it selected Breaking the Silence for a human rights award. She said the whistle-blowing group was ineligible because it was “not within the national consensus”.

The reports show extensive human rights violations against Palestinians, but they are stuffed away in a drawer and ignored.

According to critics, the Netanyahu government’s harassment of human rights groups dates to 2009, when the Goldstone Commission’s report was published. The United Nations inquiry harshly criticised Israel over hundreds of Palestinian civilians killed in Gaza during Operation Cast Lead. Much of the report relied on the work of Israeli rights groups that are now being targeted.

At the time, several bills were introduced to limit funding from foreign governments to Israeli NGOs. But faced with pressure from Washington and Europe, Netanyahu climbed down.

Nonetheless, the damage was done. A 2010 poll showed 57 percent of Israelis wanted the activities of human rights groups severely curtailed.

An early version of the current law included a provision that human rights activists would have to wear tags identifying that they were lobbying on behalf of foreign governments. Highlighting an uncomfortable historical parallel, critics suggested that, in response, activists ought to wear their tags on yellow stars – as Jews were made to do in Nazi Germany. Netanyahu, again under international pressure, dropped that section of the legislation.

Halper, of the Israeli Committee Against House Demolitions, rejected Netanyahu’s claim that Europe was “meddling” in an “internal” matter. He noted that the Geneva Conventions place an obligation on the international community to monitor human rights abuses wherever they occur, and especially in the context of a belligerent occupation.

The EU’s bylaws also require it to avoid supporting the settlements, which would violate the terms of its special trading agreement with Israel.

“The problem is not that Europe is interfering, but that in practice it is doing almost nothing,” said Halper. “The reports show extensive human rights violations against Palestinians, but they are stuffed away in a drawer and ignored.”

Halper said there was now little to distinguish the left from the right in Israel on the question of the occupation.

“The consensus rejects the idea of two states and views the settlements as an integral part of Israel,” he said. “In this climate, to disagree is to prove oneself disloyal.” 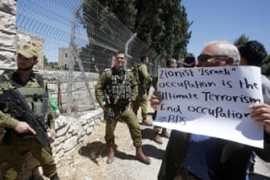 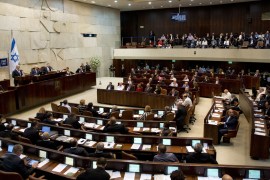