Beirut – When Zeina Daccache first set foot in Beirut’s Oum el-Nour drug rehabilitation centre 15 years ago, most of the guests were middle-aged former fighters who participated in Lebanon’s civil war and still had vivid memories of it.

She approached them with an unusual proposal: to make theatre. Daccache has since become known as a pioneer of drama therapy throughout the Arab world, producing the internationally acclaimed plays 12 Angry Lebanese (2009) and Scheherazade in Baabda (2012).

Her latest play, titled Johar … Up in the Air was performed in Lebanon’s notoriously tough Roumieh prison throughout June, and is part of a broader EU-funded project pushing to reform the country’s penal system. For Daccache, it is all part of her larger goal to use theatre as a tool to spur social change.

“I loved the idea that non-actors could be actors, and I wanted to do theatre for a cause,” Daccache told Al Jazeera. “I was tired of doing art for the sake of it. I wanted to give voice to those who had something to say.”

Daccache’s methods combine theatre studies with what she learned from working as a therapist over the years. She began working with drug addicts in 2002, and spent seven years working with the NGO Oum el-Nour. She later pursued further studies in drama therapy in the United States.

But the concept of 12 Angry Lebanese – a play that, like her latest project, Johar, aimed to connect the audience with the inmates of Roumieh – was initially met with skepticism from Lebanese authorities.

“It was 2007, right after the war with Israel, and the government did not consider theatre a priority – especially in jail,” Daccache said. “But I kept knocking on doors and, one year later, my request [to begin drama therapy inside the prison] was approved.” Several different bodies, including the head of police, the general prosecutor and the interior ministry, had to green-light the request.

Daccache, who offers drama therapy through her NGO, Catharsis, said there are many different techniques involved. “At first you do warm-up exercises to trigger emotions and imagination. Then you make them enact the moments they have been through or future situations they would want to live.”

Her adaptation of Reginald Rose’s script for Twelve Angry Men went a step further, transforming the inmates into their own judges in a dramatic role reversal. Being onstage helps inmates to face the public as well as their own fears, she said.

“This play reflects the reality of society in Lebanon, its prejudice against ‘the other’,” Daccache said. “I wanted to do this role reversal so that also the inmates would understand how people perceive them.”

After participating in the play, some inmates who previously blamed society for their problems emerged with a desire to work on themselves, she added.

Youssef, an inmate who performed in both 12 Angry Lebanese and Johar, said acting has been a turning point in his life. “I was isolated and did not interact with other inmates. Then I started acting and everything changed,” he said. Fernando, another actor in Johar, added: “Everyone needs psychological rehabilitation, and the play is offering us the chance to come to terms with ourselves and what we did.”

The show triggered a change in the vision of prisoners and of what is crime.

Zeina Daccache, pioneer of drama therapy in the Arab world

Since 12 Angry Lebanese was first performed, a documentary chronicling its inception has been screened in 74 countries and won eight international awards. The play has also been credited with helping to bring forward legislation to reduce sentences for good behaviour.

“The show triggered a change in the vision of prisoners and of what is crime,” Daccache said.

Inmates from Roumieh who were released in the years after the play was first performed were subsequently invited to share their stories in schools and at events. At one performance, Daccache said she noticed a girl crying in the audience: “She told me the man who had killed her father was one of the actors on stage.”

Scheherazade, performed in the female prison of Baabda in 2012 and distributed as a documentary the following year, shed light on the oppression faced by women in Lebanon – while Daccache’s latest play, Johar, aims to push the government to reform a law dating back to 1943, which stipulates that someone who is mentally ill and commits a crime must be detained in the prison’s psychiatric unit “until cured”.

Of Lebanon’s 23 jails, only Roumieh is equipped with such a facility, known as the Blue Building. “They call it a psychiatric unit but there are no doctors inside, no nurse, no medicines – apart from the ones brought in by the civil society,” Daccache said. “If they can only be released if ‘cured’, whereas mental illness can only be managed, this results in practice in a life sentence.”

Catharsis has worked in collaboration with members of the Lebanese parliament and foreign judges to draft new legislative proposals, which are currently in the process of being submitted to parliament for discussion.

Ghassan Moukheiber, a member of parliament who has participated in the drafting process, told Al Jazeera that while attempts at reforming the law have been made in the past, they have failed in the absence of a strong campaign pushing for such change.

“The awareness campaign launched by Catharsis and its ability to come up with concrete political recommendations are a good recipe for success,” Moukheiber told Al Jazeera. “Reform is easier when it is focused on single codes.”

When it came to staging Johar – since mentally ill patients could not represent their own stories on stage – Daccache said she “chose instead to involve another group of inmates who also have no future prospects: those who face a life sentence”.

All of the actors in Johar, which was performed inside Roumieh for members of the public, are serving life sentences. As with 12 Angry Lebanese, Daccache is working on a documentary about the play.

While representing their own plight on stage, the actors also gave voice to the inmates in the Blue Building. After initially deriding these inmates as “crazy”, they hear a story that elicits their sympathy: that of a Blue Building inmate who develops a deep devotion to his donkey, Johar – the man’s only friend in a village that shunned him.

Husain Jafar, one of the actors in Johar, believes that all inmates deserve a second chance.

“People who have been locked up here for 20 or 30 years will think about it 1,000 times before committing a mistake again,” he told Al Jazeera. “The play gave us hope to see our right to a second chance recognised.” 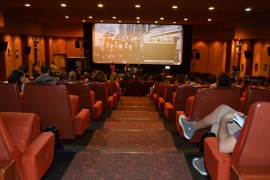 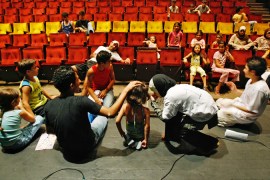 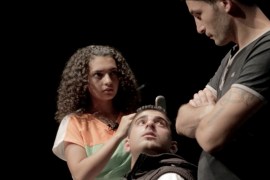