Thousands of Iraqis have defied a protest ban and rallied in the heart of the capital, Baghdad, to demand an end to sectarianism and corruption.

The demonstrators massed in Tahrir Square on Friday, holding placards reading “Yes, yes to reform. No, no to sectarianism. No, no to corruption”.

The protest went ahead despite the security forces warning late on Thursday that the rally called by the influential Shia cleric Muqtada al-Sadr was “unauthorised” and would be treated as a “terrorist threat”.

Sadr has led repeated protests in recent months, some of them breaching the central Green Zone government and diplomatic compound.

Sadr has been calling for political and economic reforms, including the formation of a government of technocrats, to put an end to what he says is a corrupt power-sharing system between the country’s rival sectarian and political factions.

Prime Minister Haider al-Abadi first called for a new cabinet including technocrats in February but has faced significant opposition from powerful political forces that rely on control of ministries for patronage and funds.

Some of Abadi’s cabinet nominees were approved in April, but in a blow to the prime minister, a court later scrapped the parliamentary session.

Mowaffak al-Rubaie, Iraq’s former national security adviser, said that he did not blame protesters for being angry over the many problems the country was facing, but cautioned against confrontations.

“I dont blame them for becoming angry … but I call upon the protesters to keep it peaceful,” he told Al Jazeera.

“This should not transform into confrontation with police or army. They should avoid storming government offices.” 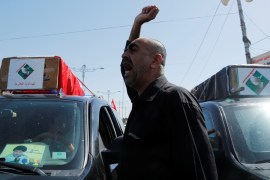