World leaders have expressed solidarity with France, condemning an attack carried out by a man who drove a lorry into crowds celebrating the country’s national day in the southern city of Nice.

French President Francois Hollande said that the incident had “all the elements to be called a terrorist attack”.

“France has been hit on the day of celebration. This is a form of sabotage. Human rights are not respected by these fanatics,” he said. “We will further strengthen our actions in Iraq and in Syria. We will continue striking those who attack us on our own soil.”

US President Barack Obama issued a statement condemning what he said appeared to be “a horrific terrorist attack”.

“I have directed my team to be in touch with French officials, and we have offered any assistance that they may need to investigate this attack and bring those responsible to justice,” he said. “We stand in solidarity and partnership with France, our oldest ally, as they respond to and recover from this attack.”

Speaking on the sidelines of an Asia-Europe summit in Mongolia, German Chancellor Angela Merkel said: “All of us who have come together at the ASEM summit are united in our feeling of disbelief at the attack of mass murder in Nice. Germany stands in the fight against terrorism at France’s side, united with many, many others. I am convinced that, despite all the difficulties, we shall win this fight.”

Donald Tusk , president of the European Council, said: “It is a tragic paradox that the victims of the attack were people celebrating liberty, quality and fraternity. We will stand united with the families of victims, the French people and the government in the fight against violence and hatred.”

Canadians are shocked by tonight's attack in Nice. Our sympathy is with the victims, and our solidarity with the French people.

“Once again, it appears that the terrorists have struck at one of our closest allies in Europe, attacking families celebrating the history and culture of their country on Bastille Day,”  Hillary Clinton, the presumptive US Democratic presidential nominee, said, referring to attacks in Paris last November.

“We deeply share the pain of the French people. Turkey is in full solidarity with France in the fight against terrorism. We will continue our struggle against these baseless (people) with determination. First and foremost, terrorism is the rape of humanity and universal values.”

Gulf countries Kuwait, United Arab Emirates and Qatar condemned the attack, with Kuwait saying it was “counter to all religious teachings and humanitarian values”.

The incident “makes it imperative for everyone to work together decisively and without hesitation to counter terrorism in all its forms,” said Emirati Foreign Minister Sheikh Abdullah bin Zayed al-Nahyan.

Another horrific attack, this time in Nice, France. Many dead and injured. When will we learn? It is only getting worse.

Belgium’s Foreign Minister Didier Reynders said: “We condemn such an attack, maybe a terrorist attack, but such an attack in France again.”

The attacker drove at high speed along the Promenade des Anglais seafront, hitting people who had been watching a firework display. He was later shot and killed by police. 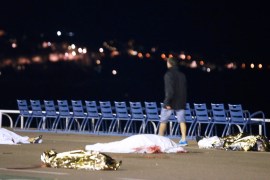 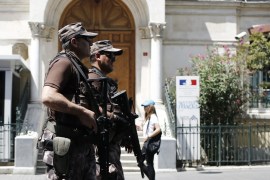