Thousands of mourners gathered pay their respects to the family of Alton Sterling, a black man who was shot and killed by white police officers in the US state of Louisiana.

Sterling, 37, died on July 5 outside a supermarket in the city of Baton Rouge when police wrestled him to the ground and shot him, saying he had a gun. The father of five, whose funeral was held on Friday, had been selling CDs.

Footage of the moment Sterling was killed was captured on a mobile phone, which contains images some readers may find distressing, was circulated online – sparking outrage and then protests.

Sterling’s killing was followed the next day with another police shooting. An officer killed the 32-year-old black man, Philando Castile, at a traffic stop in the midwestern US state of Minnesota. The aftermath of the shooting was also captured on video and streamed live by Castile’s girlfriend on Facebook.

Last week, five white police officers were shot dead at one such protest in Dallas, Texas.

About 200 people were arrested in Baton Rouge during protests last week, with demonstrators accusing the police of heavy-handed tactics. 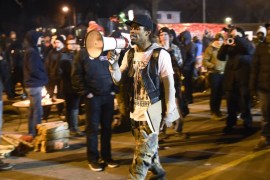 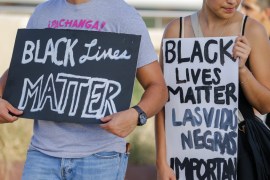