The United States has signed a deal with the Kurdish regional government in northern Iraq to provide the Kurds with further military and financial support in the fight against the Islamic State in Iraq and the Levant (ISIL) group.

A senior Pentagon official signed an agreement with Kurdish officials on Tuesday to give vetted members of the Peshmerga units, Iraq’s Kurdish military forces, some $415m for ammunition, food, pay and medical equipment, among other things.

US officials have not confirmed suggestions by some Kurdish officials that the money can be used to buy heavy military equipment.

They have insisted, however, that the Iraqi government of Prime Minister Haider al-Abadi supports the US’ efforts to boost the Peshmerga.

“We’re working hard to support those efforts; we’re doing that though through the command and control of the Iraqi government,” Mark Toner, the US State Department deputy spokesman, told reporters.

While the Peshmerga are on the frontlines in the fight against ISIL, also known as ISIS, they say they have been at war without the right weapons and regular pay cheques.

“I have a lot of friends who still have not paid their rent for the last three months of last year. They owe so much money to the grocery shop and the bazaar,” said Delawer Haider Hosheet, a Peshmerga sergeant.

The accord comes amid preparations to retake the Iraqi northern city of Mosul from ISIL, the armed group’s last major hub in the country.

As well as sending 560 more troops to help Iraqi forces in the fight to recapture Mosul, the US Defense Secretary Ash Carter has also promised additional air power to the country.

“Apache helicopters, absolutely is, is a capability that we’ve not used in support of the Iraqis so far,” Carter told NBC Nightly News.

“Iraqi Prime Minister Haider al-Abadi has indicated that he understands that as we go towards Mosul, which is the next big objective in this campaign … his forces will benefit greatly from the support of American apache attack helicopters.”

Some analysts in the Iraqi capital, Baghdad, however, do not think the US-Kurdish deal is constitutional.

Hussein al-Shatab, a former Iraqi military officer and defence strategist, says “there might be under-the-table agreements between the US defence secretary and Iraq’s defence minister, which has allowed such a deal to go through”.

US officials reject that suggestion, saying they are focused on helping Iraq reclaim all of its territory from ISIL. 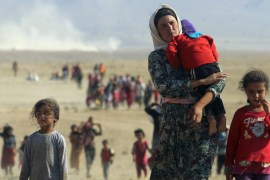