A Pakistani Taliban leader accused of orchestrating a 2014 school massacre has been killed in a US drone strike in Afghanistan, Pakistani and American military officials have said.

Umar Narai, also known as Umar Khalifa and Khalid Khurasani, died in Nangarhar province over the weekend, security officials from both countries said on Wednesday.

He was wanted for his role in a Taliban attack at a school in the northwestern city of Peshawar in December 2014 that killed more than 150 people, most of them children.

Narai “was killed along with four other enemy combatants in a US Forces-Afghanistan air strike targeting Islamic State-Khorasan Province members,” Peter Cook, the  Pentagon press secretary, said in a statement.

The US designated the “Khorasan Province” – an affiliate of the Islamic State of Iraq and the Levant (ISIL, also know as ISIS) group based in Afghanistan and Pakistan – a “terrorist” organisation in 2015.

Al Jazeera’s Kamal Hyder, reporting from Islamabad, said the drone strike took place in Afghanistan’s Nangarhar province “when a meeting of some sort was taking place between the fighters”.

“The drone strike took place on July 9th and Umar Khalifa along with his lieutenant Qari Saifullah, who was responsible for training suicide bombers, were in the middle of some talks in the Afghanistan’s remote region,” Hyder said.

“I believe for his own group, a faction of the Tehreek-e-Taliban (TTP) known as the ‘Gedar group’, it is a big loss because there is no leadership among them, but for the TTP as whole, Umar’s death is not considered as a big blow, as they have a leadership in the name of Fazlullah,” Ayaz Wazir, a former Pakistani Ambassador told Al Jazeera.

“It is indeed a victory for Pakistan but he was killed in Afghanistan so the credit goes to the Americans. However, I think the tip was given from the Pakistan side about his whereabouts and the American acted upon it which resulted in his death.”

Narai was also behind a deadly Taliban attack on Bacha Khan University in the northwestern town of Charsadda in January, and another Taliban assault on a Peshawar air force base in September 2015, Cook said.

The attacks killed at least 21 and 29 people, respectively.

The drone strike that killed Narai “underscores the common security interests shared by the United States, Afghanistan and Pakistan on matters of terrorism”, Cook said.

“Only through continued cooperation will we collectively succeed in eliminating terrorist safe havens in the region.”

The Pakistani Taliban, also known as Tehreek-e-Taliban, did not comment on the reports of Narai’s death. The armed group is waging war against the Pakistani state and is separate from the Afghan Taliban.

The Pakistan army launched Operation Zarb-e-Azb under US pressure in 2014, in a bid to wipe out fighters and their bases in the North Waziristan tribal area and bring an end to violence that has cost the country thousands of lives. 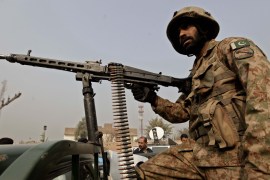