There were scenes of mayhem in parts of southern Indian-administered Kashmir after Indian forces opened fire on thousands of protesters, killing at least 19 civilians and wounding scores of others during a mass funeral for a slain rebel fighter.

Police said a man was killed on Sunday as hundreds of people clashed with troops in southern Pulwama town, while six civilians who had been injured after Indian troops fired on rock-throwing protesters on Saturday died overnight. Eight protesters were killed on Saturday.

Tens of thousands of people defied a curfew in parts of Kashmir on Saturday to pay homage to Burhan Wani, the rebel fighter and so-called poster boy of the new Kashmiri resistance, resulting in clashes with police and paramilitary.

Wani was shot dead along with two other fighters by security forces and police in Bundoora village on Friday, 85km south of Srinagar, prompting mass mourning across the valley.

According to officials, as news of the killing spread across the valley on Saturday, clashes erupted in several districts in southern Kashmir as thousands of residents hurled rocks at Indian troops, who responded by using live ammunition, pellet guns and tear gas.

He joined because he was humiliated on the streets, his brother was tortured, this is where his resentment for the Indian government came from, and this is why Kashmiris identified with him

Street clashes also spread to Srinagar, the capital of the Indian-administered Kashmir, as thousands tried to vent their anger on the streets.

Shams Irfan, a local journalist who travelled to Tral, where authorities had cut electricity, blocked roads and the internet as part of the wider crackdown on protesters, told Al Jazeera that the demonstrations in southern Kashmir were “the biggest he had ever seen”.

Earlier, thousands of armed police and paramilitary soldiers in riot gear fanned out across most towns and villages. They laid razor wire and erected steel barricades on the streets and drove through neighbourhoods, warning residents to stay indoors.

Wani, in his early 20s, had become the face of Kashmiri resistance over the past five years.

As the son of a school principal, he is widely credited for reviving armed resistance in Kashmir, using social media such as Facebook to reach out to young Kashmiri men.

Khurram Parvez, programme director of Jammu Kashmir Coalition for Civil Society in Srinagar, described Wani’s death as an extra-judicial killing, saying that the Indian government had made no attempt to arrest him. He said that Wani was an example of a rebel who had not joined out of ideological reasons.

“He joined because he was humiliated on the streets, his brother was tortured, this is where his resentment for the Indian government came from, and this is why Kashmiri’s identified with him.”

“He is being painted as a dreaded militant, but he was often very politically correct, [for instance] he spoke about Pandits returning in peace and assured Hindus that their pilgrimage would not be a target by militants,” Parvez said.

Indian officials, fearing that the killing could lead to violent protests in the already troubled region, suspended an annual Hindu pilgrimage to a mountain cave which draws about half a million people each year.

Reacting to the developments, Parvez, said that despite the curfew, “every death would provoke more people to come out […] resulting in an endless cycle”.

Waheed Parra, leader of the The Jammu and Kashmir Peoples Democratic Party currently in a coalition with BJP party in Kashmir, said the state government wanted immediate peace in the region and called for de-escalation of tensions.

“We’re praying for peace and the safety of our youth.” he told Al Jazeera.

Most people in Kashmir have long resented the Indian presence, and support rebel demands for an independent Kashmir or a merging with Pakistan. More than 68,000 people have been killed in the uprising and the subsequent Indian military crackdown in Indian administered Kashmir. 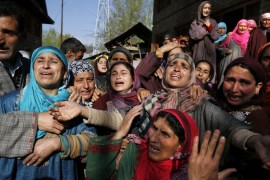 Seventy-year old woman latest to die as protesters face off with police for a second day in Indian-administered Kashmir. 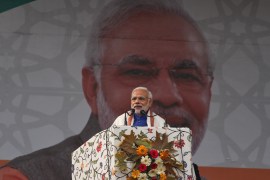 Modi offers $12bn in aid to India-administered Kashmir but critics say resolution of political dispute is key to peace.