Hundreds of thousands of Iranians have staged anti-Israel rallies across the Islamic Republic to mark al-Quds day, the country’s annual Palestinian solidarity day, which falls on the last Friday of Ramadan.

Many at the protest in Tehran – from young children to elderly ladies – sported red bandanas with “I love fighting Israel” written on them, while others burned a replica of the Statue of Liberty with a Star of David on its head.

Iran does not recognise Israel and has marked al-Quds day since the start of its 1979 Islamic revolution.

Al-Quds is a historic Arabic name for Jerusalem, and Iran says the day is an occasion to express support for the Palestinians and emphasise the importance of Jerusalem for Muslims.

“In Lebanon alone over 100,000 missiles are ready at all times to fly … at the heart of the Zionist regime,” said General Hossein Salami, deputy chief of the elite Revolutionary Guards, in a speech before Friday prayers at Tehran University.

“Tens of thousands of other missiles … have been planted across the Islamic world and are awaiting orders so that with the push of a button a sinister and dark dot on the political geography of the world disappears forever,” he said. 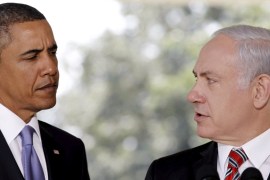