A bomb attack targeting a police vehicle in a central Istanbul district has killed at least 11 people, including seven members of the police force, the city’s governor has said.

Speaking at the scene of the blast in Beyazit district, Istanbul Governer Vasip Sahin said a bomb placed inside a car detonated as a police vehicle passed by.

Reports said the explosion took place near the Vezneciler metro station, which is within walking distance of some of the city’s main tourist sites, including the Suleymaniye Mosque.

Emre Rende, a freelance journalist reporting from Istanbul, said the “bus was targeted by a remotely detonated car bomb before a second blast believed to have been caused by a gas canister.

“The attack happened close to the Grand Bazaar so it might have been done to keep tourists away,” he added.

According to the state-run TRT news channel, the bus was passing in the Beyazit district of Istanbul.

Pictures showed the bomb had turned the police vehicle into mangled wreckage and that nearby shops had their front windows smashed out by the force of the blast.

President Tayyip Erdogan said on Tuesday the country’s fight against armed groups will continue “to the end”. Speaking to reporters after visiting some of the injured in a hospital near the site of the blast, Erdogan said the attack was “unforgivable”.

The bombing came during the first days of Ramadan, the Islamic holy month, a time marked by dawn-to-dusk fasting and intense prayer.

Istanbul had already been hit by two bombings this year, including in tourist areas.

Both attacks were blamed on the Islamic State of Iraq and the Levant (ISIL, also known as ISIS) group, and a pair of attacks in Ankara that were claimed by Kurdish separatists and killed dozens.

The two attacks in Ankara were claimed by the Kurdistan Freedom Falcons (TAK) – a splinter group of the better-known outlawed Kurdistan Workers’ Party (PKK).

The attacks have had a dire effect on the tourism industry heading into the key summer season.

Some 1.75 million foreigners came to Turkey in April, down more than 28 percent on April 2015, the tourism ministry said in its latest release. 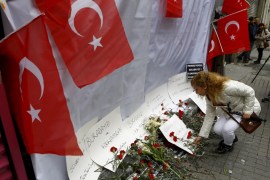 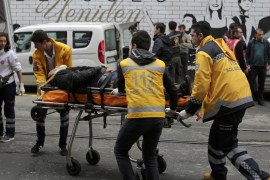 At least five killed and 36 wounded on popular Istiklal street, a major thoroughfare in the Turkish city’s centre.