Brazil’s political crisis heated up as authorities reportedly sought the arrests of senior figures in the push to impeach suspended president Dilma Rousseff, accusing them of obstructing a corruption probe.

If reports in the main Brazilian newspapers on Tuesday are confirmed, new doubts would be cast over the impeachment of Rousseff, pushing Latin America’s biggest economy into ever greater uncertainty with less than two months to go before Rio de Janeiro hosts the Summer Olympics.

Cunha, who is the suspended speaker of Brazil’s lower house of Congress, said prosecutors’ request for his arrest on charges of obstructing a sweeping corruption investigation at state firms was “absurd”.

The report, which did not name its sources, was matched by two other newspapers shortly thereafter.

However, officials at the prosecutor’s office and Supreme Court refused to confirm the reports to AFP news agency.

The four are accused of participating in a huge embezzlement and bribery network centred around the state oil company Petrobras.

Al Jazeera’s Adam Raney, reporting from Rio de Janeiro, said if the court does grant the arrests, it would be a huge deal for Brazil.

“It is worth noting that Brazil’s general prosecutor refused to comment on whether these reports are true – that he asked for the Supreme Court of Justice to issue those arrests for these four men.

“If granted by the Supreme Court, this would be a huge deal for Brazil because these four are among the most powerful politicians,” Raney said.

WATCH: Dilma Rousseff – ‘No legal grounds for this impeachment’

According to the reports, Janot now accuses them of trying to obstruct the probe into the scheme, known as Operation Car Wash.

The alleged evidence against them came from secret recordings of conversations made by a former oil executive, Sergio Machado, who is cooperating with Car Wash prosecutors as part of a plea bargain.

Calheiros denied any wrongdoing, calling the request for his arrest “irrational, disproportionate and abusive”.

“I did not practise any specific act that can be interpreted as a supposed attempt to obstruct justice,” he said in a statement.

All four in the prosecutor general’s crosshairs are from Temer’s PMDB party, which has been crucial to pushing impeachment through Congress.

But if confirmed, the scandal would be a huge blow against interim president Michel Temer, who took the reins after the suspension of Rousseff last month for her impeachment trial.

“Because they are unable to find any corruption charges against me, they are trying to have me convicted of violating fiscal obligations.

“When you believe justice is on your side, that gives you strength to withstand all odds,” she said. 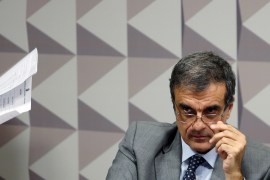 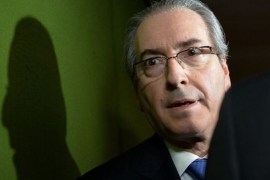 Eduardo Cunha, the architect of efforts to impeach President Rousseff, is accused of obstructing a corruption probe.