Several Iraqi civilians fleeing fighting in the city of Fallujah have drowned in the Euphrates while attempting to cross to safety into government-controlled areas.

Thousands of civilians are caught in the crossfire in and around Fallujah, controlled by the Islamic State of Iraq and the Levant (ISIL, or ISIS) group, as government forces and allied militias are trying to recapture the city.

Hundreds of Iraqi families were reportedly trying to cross the river into the government-held city of Amiriyat al-Fallujah, about 50km south of Fallujah.

In the absence of organised help by the government, many of the people fleeing have been using makeshift boats.

The UNHCR confirmed that several people, including children, had drowned while trying to flee the city.

The route is one of the “safe corridors” provided by the Iraqi army out of the city. Two other passages into government-controlled territory are not being used by civilians because of safety concerns.

Caroline Gluck, a senior public information officer of UNHCR, said about 12,000 people have fled the conflict area since May 23 when the government offensive started.

“Many of them are desperate and travelled long journeys trying to avoid detection by ISIL with nothing but the clothes they wear. The fleeing families were traumatised, distraught and looked pale,” she told Al Jazeera.

The families were housed in camps in Amiriyat al-Fallujah and other areas in the region, and Gluck called on the government to do more to provide displaced families with the help they need.

Prime Minister Haider al-Abadi said the need to spare civilians was slowing his forces, which have surrounded Fallujah but have stalled at the fringes of the city.

“Security forces raised the Iraqi flag in the suburb after pushing deep into the area and killing at least 27 Daesh elements,” he said, using an Arabic acronym for ISIL

There are up 50,000 people still stuck in the centre of Fallujah struggling with dwindling water and food supplies.

No aid has reached Fallujah since September last year and residents have been living on dates, dirty water from the Euphrates river and animal feed, aid groups said.

With reporting by Ali Younes 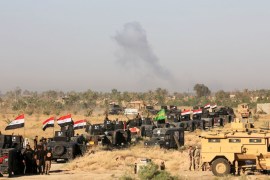 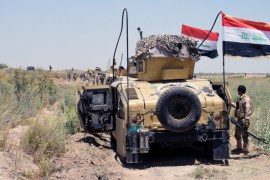 Shia militias must behave in a sensitive and empathetic way to the mostly Sunni civilians they liberate in Iraq.