A broad area of thundery showers has been bringing heavy downpours to the western Caribbean over the past few days. It now looks likely that this system could develop into the third named storm of the year.

Should it do so, it will be named Colin. Remarkably, this would make it the earliest that we have reached a “C” named storm since the naming system was brought in for Atlantic hurricanes, and the earliest third storm of the year since records began in 1851.

The clutch of thunderheads looked set to become increasingly organised as they move from the northwest Caribbean and into the southern Gulf of Mexico. It is likely to become a tropical depression within the next 24 hours as it tracks northwestwards towards the Florida Peninsula.

The National Hurricane Center is monitoring the system closely and has given an 80-percent chance that it will become a tropical storm within the next 48 hours. It has issued warnings for heavy rainfall.

There is a flood threat across parts of the Yucatan Peninsula along with western Cuba, the Florida Keys and later the Florida Peninsula over the next few days. Sea surface temperatures are already above average at 28C which will encourage big downpours.

One saving grace is that the system is expected to move through quickly. Hence, any heavy rain will not be over any one place for too long. 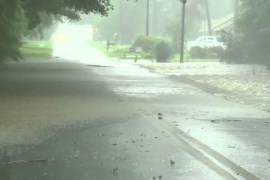 Tropical Depression Bonnie brings flooding to the US

Coastal parts of Georgia and the Carolinas are deluged as the storm churns over the region. 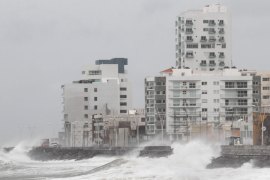 Quintana Roo state declares state of emergency after the region was hit by unseasonable downpours.