Tens of thousands of people have poured into central Hong Kong to mark the 27th anniversary of China’s Tiananmen Square deadly crackdown – but many young activists turned their backs on the annual vigil because of disagreements over its aims.

Hundreds, possibly more, of people were killed on the night of June 3-4, 1989 as tanks and troops converged at the central Beijing square, where student-led demonstrators had staged a peaceful seven-week sit-in to demand democratic reforms.

Organisers of Saturday’s candlelit vigil said 125,000 people gathered into Victoria Park to pay tribute to the dead, holding a minute of silence in the only large-scale public commemoration of the killings. Police did not immediately give a crowd estimate.

The vigil is organised by the Hong Kong Alliance in Support of Patriotic Democratic Movements in China. It demands that Beijing overturn its verdict that the Tiananmen protests were a counter-revolutionary riot and also calls for one-party dictatorship in China to be replaced by democracy.

Yet, Hong Kong student groups that have been long-standing supporters of the event dropped out this year amid calls over greater autonomy from China.

Young activists from the new “localist” movement, say Hong Kong should push for its own autonomy, even independence, rather than the democratisation of the mainland.

The move by the student groups underscores the widening rift that emerged between younger and older generations of pro-democracy activists over the idea of Hong Kong’s identity following 2014 protests over the Beijing’s decision to restrict elections in the semi-autonomous city.

Al Jazeera’s Rob McBride, reporting from the vigil in Hong Kong, said organisers were waiting to see what impact the students’ move to hold rival gathering in university and college campuses would have.

“The student groups seem to be disillusioned with this Tiananmen movement and the calls for democracy in China, which they argue after nearly 30 years are no closer to being achieved.

“It’s far better, they say, to concentrate on local Hong Kong issues and political development here, but as the organisers of this rally would argue, Hong Kong politics and the politics of mainland China are so closely linked you cannot have development of one without the other,” McBride said.

‘Spirit will not be crushed’

In Beijing, authorities tightened security around Tiananmen Square, highlighting the enduring sensitivity over the events among the Communist Party leadership.

In Taiwan’s capital, Taipei, Wu’er Kaixi, one of the student leaders of the 1989 Tiananmen protests, was among about 200 participants gathered at Liberty Square for a memorial event.

“The spirit of June 4 is an act of courageous humans pursuing the universal value of freedom,” he said. “This spirit will not be crushed under machine guns and tanks. It will not die because of (the Chinese government’s) suppression.”

Ahead of the anniversary, family members of those killed in the crackdown were placed under additional restrictions, either confined to their homes or forced to leave the capital.

China has never released a death toll from the crackdown and prohibits public discussion of the events.

Asked on Friday about the anniversary, Chinese Foreign Ministry spokeswoman Hua Chunying said China had “long ago reached a clear conclusion about the political turmoil at the end of the 1980s and other related issues”. 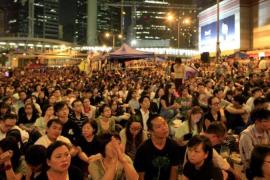 Protesters pour into major thoroughfare a day after government called off talks with student leaders.