Torrential rain and flooding have killed at least 14 people in parts of Europe, with France declaring a natural disaster after the River Seine in Paris burst its banks in some places displacing thousands of people.

French President Francois Hollande made the announcement on Friday, saying compensation would be paid to those affected by the worst flooding to hit the French capital in 35 years.

“When there are climate phenomena of such seriousness, we must all be conscious that it’s on a world scale and that we must act,” Hollande said.

Paris Mayor Anne Hidalgo has ordered some parks to close, and gymnasiums to open to homeless people amid the flooding, which city authorities said could take weeks to recede.

The French interior ministry said the homes of some 20,000 people have been evacuated.

Another 20,000 homes in the south of Paris have lost power.

“Authorities are bracing themselves for a couple of more weeks of possible flooding. There’s a lot a panic in Paris,” Al Jazeera’s Mohamed Vall reported from the city.

French environment officials said the Seine will reach its maximum level late on Friday as rainfall across the country begins to taper off.

The flooding has also forced many museums in the French capital, including the Louvre, to shut down, as a protective measure.

As the flooding continues, French authorities said on Friday that a second person had died in the flooding. The 74-year-old man fell into a river in the Seine-et-Marne region east of Paris. He was riding a horse at the time of the accident on Thursday evening.

Earlier in the week, an 86-year-old woman died in her flooded home in Souppes-sur-Loing, southeast of Paris.

In Germany, 10 people have been killed, including four in Baden-Wuerttemberg, to Bavaria’s west, in flooding that hit Sunday and Monday.

The German Insurance Association estimated that this week’s flooding has caused some $500m in damage in the state of Baden-Wuerttemberg alone.

Two other people were reported to have been killed in eastern Romania. 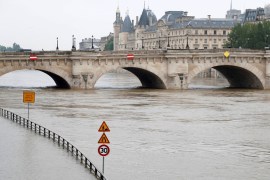