Japanese prosecutors have charged a US military contractor with the alleged rape and murder of a local woman in Okinawa, a high-profile case that has reignited anti-American sentiments on the southern Japanese island.

Kenneth Franklin Shinzato, 32, a former US Marine employed at the US Air Force’s sprawling Kadena Air Base, was first charged in early June for allegedly disposing of the body of the victim, identified by local media as 20-year-old Rina Shimabukuro.

As is common practice in Japanese law, he was again charged by Okinawa prosecutors, this time for the separate crime of the alleged rape and murder of the 20-year-old woman, Jiji Press and other local news reports said.

The woman was found dead in a forest last month, nearly three weeks after she disappeared while taking a walk.

Prosecutors and court officials in Okinawa refused to confirm the reports.

READ MORE: Voices of Okinawa – standing against a US military base

The case has intensified longstanding local opposition to the American military presence on the strategic island, which reluctantly hosts nearly 75 percent of land allotted for US bases in Japan even though it accounts for just a fraction of the country’s total area.

Crimes by US personnel have long sparked protests on crowded Okinawa, and have been a frequent irritant in relations between close security allies Japan and the US.

More than half of the 47,000 American troops in Japan under a decades-long security alliance are stationed on Okinawa, the site of a major World War II battle that was followed by a 27-year US occupation of the island.

US military personnel, dependants and civilians have been accused of crimes ranging from rape and assault to hit-and-run and drink-driving accidents.

In mid-June, tens of thousands rallied on the island to protest against the heavy US military presence and violent crimes committed by American personnel.

Shinzato’s initial arrest in May sparked fresh anger among Okinawans and a harsh public rebuke by Japanese Prime Minister Shinzo Abe to US President Barack Obama when he visited Japan for a Group of Seven summit last month.

Obama expressed regret over the incident and vowed to enact measures to prevent crime by Americans on Japanese soil. The US military on Okinawa, meanwhile, imposed restrictions including a curfew and temporary curbs on alcohol consumption. 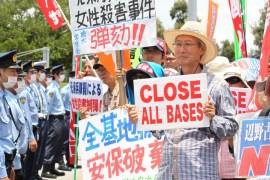 Japan’s Okinawa rallies against US military base

Protesters express frustrations with US presence on island after a former soldier allegedly raped and killed a woman. 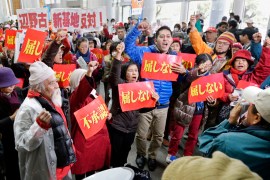 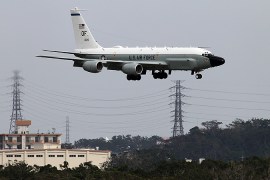 The two soldiers had admitted their guilt in case that led to night-time curfew on all US military personnel in Japan.