Egyptian President Abdel Fattah al-Sisi has called for religious reforms to counter “extremists” in a speech to Muslim clerics.

Sisi on Wednesday urged scholars from Al-Azhar, the highest centre of Sunni Muslim learning, to rethink religious discourse and “purge it of flaws” that negatively affect Islam.

“I fear that we have not until now found the real path to confronting fanaticism and extremism: look at the map of extremism in the world,” he said in the televised speech.

“We are on a mission, during one of the most difficult periods not only for Egypt, but for Egypt and all Arab and Muslim states.”

Sisi also questioned the standing of the Muslim countries on women’s rights.

“If you found that the flaw was only in Egypt, we’d say OK. But I wonder, in how many of these 50 [Muslim] countries is this situation present?” he asked.

READ MORE: Why does the West need Sisi?

Sisi’s calls for reforms in Islamic thought have been met with scepticism by opponents who accuse his security services of extensive human rights abuses.

More than 1,000 supporters of former President Mohamed Morsi have been killed in clashes since Sisi overthrew him on July 3, 2013. More than 600 of them were killed in a single day when police dispersed a Cairo protest camp.

Thousands have been jailed, and critics say the crackdown has helped radicalise more people. 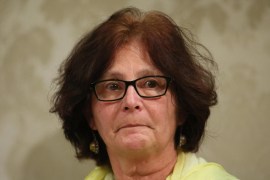