Israeli Prime Minister Benjamin Netanyahu has confirmed Israel’s deal with Turkey to normalise relations, adding that the agreement will be a huge boost for his country’s economy.

After talks with US Secretary of State John Kerry in Rome, Netanyahu on Monday said it would have “immense implications for the Israeli economy”.

Netanyahu promised to outline the full details of the deal later in the day. His Turkish counterpart is expected to do the same in Ankara.

The anticipated deal will see Israel apologise for raiding a Turkish aid flotilla heading to Gaza in 2010, provide compensation for the families of the ten victims of that raid and allow Ankara to provide humanitarian aid to the besieged Gaza Strip, a senior Turkish official has confirmed to Al Jazeera.

No references were made to Hamas in the agreement, according to officials, despite reports that Turkey agreed to curb the group’s activities.

Initial reports of the deal described Turkey’s key conditions to include an Israeli lifting of the blockade on the Gaza Strip. This stipulation, however, will not be met.

“One of the interesting things that we’ve come to find out recently is that the material Turkey will be sending to Gaza will first land in the Israeli port of Ashdod,” Al Jazeera’s Jamal Elshayyal, reporting from Ankara, said.

“Obviously the third condition has not been met because if this deal stipulates that Turkey must send in materials to Ashdod, it means that the siege is still in place. Anything that is reaching Gaza must still get there via the Israeli port, meaning it requires Israel’s approval.”

The Hamas political movement, which controls the Gaza Strip, has said it hopes that the agreement will have a wider impact across the Palestinian territories.

Kerry welcomed the agreement and congratulated Netanyahu, adding that the US has been working on the rapprochement for several years, calling it a “positive step”.

Israeli-Turkish relations soured in 2010 after the deadly Israeli raid on the six-ship Turkish flotilla seeking to break the Israeli blockade on Gaza and to deliver aid to the Palestinians living there.

Nine activists aboard the Mavi Marmara ferry were killed, with a 10th person later dying of his wounds. 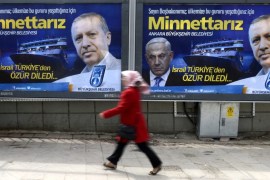