Several Palestinian worshippers have been hurt after they clashed with Israeli police at the al-Aqsa Mosque, following protests against Jewish visits at the site during Islam’s holy month of Ramadan.

The Palestinian Red Crescent said on Sunday that its medical team took seven Palestinians to an East Jerusalem hospital for treatment of injuries from sponge-tipped bullets, tear gas and beatings.

Israeli police said officers at the Old City site revered by Muslims and also by Jews – who call it the Temple Mount – arrested four “masked youths who were disrupting visits on the Temple Mount” by non-Muslims.

Jews and other non-Muslims can visit the site but are banned from praying there.

The al-Aqsa compound is the third-holiest site in Islam. It is located in East Jerusalem, which Israel annexed in 1967 – in a move never recognised by the international community – as part of its occupation of the West Bank.

A police spokesman questioned by AFP said that he was not aware of officers using force. But images posted on social media showed Israeli police officers dragging a man with bloodied face and head.

Palestinian officials said the trouble began when Israel allowed Jewish visitors into the compound in breach of a tradition that only allows Muslim worshippers to enter during the last 10 days of Ramadan, which are now in progress.

They said that they were taken by surprise at the appearance of the visitors and a group of Muslim youths protested, before retreating to the Al-Aqsa Mosque itself.

The 10 days, which began on Sunday, are the most solemn for Muslims and the period attracts the highest number of worshippers to the site. 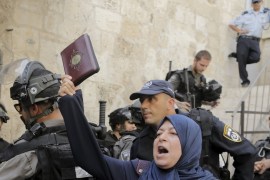 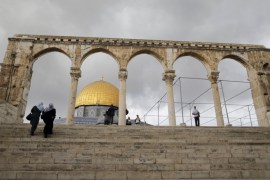