South African President Jacob Zuma failed in his appeal against a court ruling that corruption charges against him be reinstated, another setback for the leader who has been facing calls for his resignation.

Friday’s ruling puts further pressure on Zuma after a damning constitutional court judgment against him in March, and comes six weeks before local elections at which the ruling African National Congress faces a strong challenge from opponents seeking to capitalise on what they see as his missteps.

The court said Zuma and National Director of Public Prosecutions Shaun Abrahams, who had appealed against the earlier ruling alongside the president, had no grounds to do so.

“The matter is of course important for Mr Zuma. However if the appeal does not have reasonable prospects for success, leave to appeal should not be granted,” Judge Aubrey Ledwaba said.

It was not immediately clear if Zuma would appeal Friday’s ruling, but legal analysts said both he and the National Prosecuting Authority (NPA) could still lodge a petition to the Supreme Court of Appeal.

The hundreds of corruption charges against Zuma relate to a major government arms deal in the late 1990s.

Zuma said in April that a government investigation into the arms deal had found no evidence of corruption or fraud but critics denounced the findings as a cover-up.

READ MORE: Julius Malema says they are ready to remove Zuma by force

ANC spokeswoman Khusela Sangoni declined to comment on the ruling, referring questions to the presidency where no official could be reached for comment.

The opposition Democratic Alliance party said Abrahams should now file the graft charges against Zuma, adding that “no man is or should be above the law”.

The South African leader has been beset by scandal during his tenure, but has managed to hold on to his post with backing from the ANC, which has been in power since the end of white-minority rule in 1994.

In April, he survived an impeachment vote after the Constitutional Court said he broke the law by refusing to refund some of the 240 million rand ($16m) of state money spent on refurbishing his private residence. 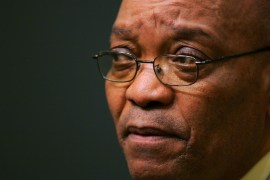