The Colombian government and the Revolutionary Armed Forces of Colombia (FARC) have signed a ceasefire, which includes the armed group laying down their arms after more than 50 years of conflict.

Negotiators signed the ceasefire agreement on Thursday in the presence of Colombian President Juan Manuel Santos and FARC commander Rodrigo “Timochenko” Londono at a ceremony in Havana.

The historic event was also attended by UN Secretary-General Ban Ki-Moon, the presidents of Cuba, Venezuela and Chile and the Norwegian foreign minister.

The agreement is a final step in peace negotiations which have been going on since 2012.

Colombia’s decades-long civil war has left more than 220,000 people dead and driven millions from their homes.

“Colombia got used to living in conflict. We don’t have even the slightest memories of what it means to live in peace,” Santos said on Thursday in Havana. “Today a new chapter opens, one that brings back peace and gives our children the possibility of not reliving history.”

Santos has said a final peace treaty could be signed next month.

The Colombian president wants a referendum to put the seal of popular approval on its peace effort. But it faces resistance from some political rivals.

Supporters of the peace process also fear that too many voters could simply stay home, threatening to leave the referendum below the participation threshold needed to be valid.

Momentum had been building towards a breakthrough in negotiations after Santos said earlier this week that he hoped to deliver a peace accord in time to mark Colombia’s declaration of independence from Spain on July 20.  But the agreement signed on Thursday went further than expected.

In addition to a framework for a ceasefire, both sides agreed on a demobilisation plan that will see rebels concentrate in rural areas under government protection and hand over weapons to UN monitors. The peace accord gives the disarmament process a six-month time limit.

The deal also includes security guarantees for the FARC during its transition to a peaceful political party. A similar attempt in the 1980s led to thousands of rebels and their sympathisers being killed by paramilitaries and corrupt soldiers.

A peace deal won’t immediately make Colombia a safer place. The cocaine trade remains a powerful magnet for criminal gangs operating throughout the country’s remote valleys and jungles. And the National Liberation Army, a much smaller and more rebellious armed group, has not yet begun peace talks with the government.

A strong element within Colombia is opposed to a peace deal with FARC. They are led by popular former President Alvaro Uribe, who spearheaded the military offensive against the rebel group last decade.

“It damages the word ‘peace’ to accept that those responsible for crimes against humanity like kidnapping, car-bombing, recruitment of children and rape of girls don’t go to jail for a single day and can be elected to public office,” Uribe said on Thursday in reaction to the peace agreement.

But regional and international leaders were enthusiastic about the deal.

“The peace process can’t turn back,” said Cuban President Raul Castro, whose country was one of the guarantors of the talks.

In Washington, US Secretary of State John Kerry said the “finish line is approaching and nearer now than it has ever been,” but that “hard work remains to be done.” 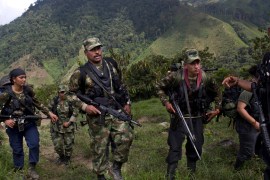 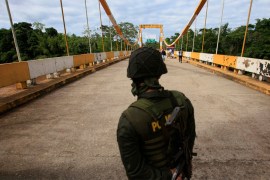 As talks continue between the government and the FARC, refugees ask what will become of the other armed groups.