Myanmar has banned its officials from referring to the oppressed Muslim minority as Rohingya, instead insisting they are called “people who believe in Islam”.

The order by the Information Ministry attempts to sidestep the controversy that surrounds the identity of the Rohingya and head off disquiet during an ongoing visit by United Nations Special Rapporteur on Myanmar Yanghee Lee.

“Rohingya or Bengali shall not be used” during Lee’s visit, the ministry said in a letter.

“Instead, ‘people who believe in Islam in Rakhine State’ shall be used,” it added.

The letter, dated June 16 and labelled “secret”, added ethnic Rakhine should be referred to “as ‘people who believe in Buddhism’ in Rakhine State”.

Buddhist nationalists bitterly oppose the use of the term Rohingya to describe the roughly million-strong minority – most of whom live in strife-torn western Rakhine State.

Hardliners instead label the stateless group “Bengalis”, shorthand for people from neighbouring Bangladesh, even though Rohingya people have lived in Myanmar for generations.

Successive governments have refused to grant the majority of them citizenship.

Scores of Rohingya have died in sectarian violence since 2012 and tens of thousands more have since languished in squalid displacement camps in western Rakhine State.

On Monday, the UN warned that ongoing violations against the Rohingya could amount to crimes against humanity.

In a report the UN human rights office said it had found “a pattern of gross violations against the Rohingya… [which] suggest a widespread or systematic attack … in turn giving rise to the possible commission of crimes against humanity if established in a court of law”.

The report was published amid hope that Myanmar’s new government, steered by Aung San Suu Kyi and her pro-democracy party, would address deep hatreds in Rakhine State.

But Suu Kyi has disappointed rights groups by avoiding direct discussion of the incendiary issue and asking for “space” while she seeks to build trust in the troubled state.

Tens of thousands of Rohingya are confined to camps in Rakhine state and barred from travel, many struggling to access basic healthcare or education.

The UN report said they are subject to a web of abuse by state security officials including summary executions, enforced disappearances, arbitrary arrests and detention, torture and ill-treatment, and forced labour. 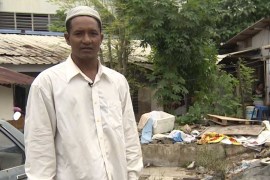 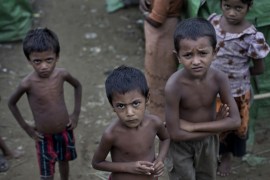