Rival sides in Britain’s referendum on European Union membership clashed in a passionate debate to the roars of an audience of six thousand in a London concert arena.

The debate on Tuesday evening, before Thursday’s referendum, was a final opportunity for the two camps to win over voters, with polls showing a razor-tight race less than 36 hours before a vote that will shape the future of Europe.

Panellists locked horns over immigration, as the pro-EU London Mayor Sadiq Khan tore into his predecessor Boris Johnson, a key campaigner on the “Leave” side.

“You’re telling lies and you’re scaring people,” Khan declared as he brandished a “Leave” leaflet warning that Turkey could join the EU.

How much does the UK really pay the EU each week?

One of the most disputed campaign issues is the Leave camp’s claim the UK pays £350m – that’s about $440m – to the European Union each week.

It says that money would be better spent on things like Britain’s squeezed universal healthcare system, the NHS. So, does the UK actually send millions to Brussels each week? Well it’s a grey area that needs a lot more context.

The EU is funded by contributions from member states. Each week, Britain’s contribution is about $440m. But, and here’s where it gets tricky, a fair chunk of that money gets returned.

There’s an instant rebate that shaves about $135m off. A further $115m is given back to spend on EU projects in Britain. It’s used for things such as farming subsidies and stimulus programmes in poorer areas.

But the Leave campaign points out that the way that money is spent is largely decided by the EU, not Britain. What’s left is a contribution of about $250m a week – almost half the original figure.

And the EU also gives about $40m to the UK’s private sector each week, to fund things such as university research.

“That’s scaremongering, Boris, and you should be ashamed … you are using the ruse of Turkey to scare people to vote Leave,” Khan said to cheers from the audience.

Johnson threw the criticism back at Khan, saying the pro-EU side had run a “Project Fear” by warning that leaving the 28-member bloc would damage Britain’s economy.

“They say we have no choice but to bow down to Brussels. We say they are woefully underestimating this country and what it can do,” Johnson said.

The Conservative MP promised Britain an “independence day” on Thursday if it voted to leave, bringing sections of the audience to their feet in prolonged applause.

The prospect of Britain becoming the first state to defect from the EU in the bloc’s 60-year history has raised fears of a domino-effect collapse of the European project.

European Commission president Jean-Claude Juncker earlier warned Britain against “an act of self-harm” he said would endanger everything Europeans had worked together to achieve.

As the audience filed into the 12,500-seat Wembley Arena, which often hosts global music stars, they were serenaded by pro-Remain demonstrators singing “All You Need is Love”.

Organisers Avaaz said the serenade was an attempt to counter the “fear and division” of the campaign.

But the two sides remained deeply opposed and the audience split among equally vocal Remain and Leave crowds.

“It felt like a football atmosphere … it felt very hostile. You could tell there was almost a mist of blood in the air,” said Michael Flaxington, 21, a student from Kent.

Linda Mayne, 60, also from Kent, who is retired, said that the debate was well-argued on both sides but had not swayed her from her conviction to vote Leave.

“I support Leave because I want the UK to have our own democracy back, to be able to control ourselves,” Mayne said.

But 21-year-old student Anton Georgiou said the Leave side’s “take back control argument” was “an empty slogan with no detailed plan whatsoever”.

As the debate concluded, the Daily Mail newspaper announced that it was endorsing Brexit.

“Lies. Greedy elites. Or a great future outside a broken, dying Europe,” read its front page. “If you believe in Britain vote Leave.”

Two newspapers, the Daily Express and The Sun, carried front-page stories reporting that Queen Elizabeth II was challenging guests to give her “three good reasons” why Britain should stay in the EU.

Earlier this year, Buckingham Palace issued a rare complaint over a previous article by The Sun that claimed the queen favoured Brexit, a challenge to the monarch’s long-held position of political neutrality.

The Times, which has backed Britain remaining in the EU, published a warning from hundreds of business leaders, including Virgin boss Richard Branson and US media mogul Michael Bloomberg, warning that Brexit could cause an “economic shock”.

“Nobody knows what is going to happen,” Prime Minister David Cameron told the Financial Times, insisting he did not regret calling the referendum.

“I believe it will, one way or another, be decisive. Britain will not want to go through this again.”

Actor Liam Neeson said that a vote for Brexit could be hugely damaging for his native Northern Ireland, potentially undermining the peace process that quelled decades of violence known as the Troubles.

“A UK exit would have the worst ramifications for the island of Ireland,” Neeson said.

The outcome looked deeply uncertain, as a poll by Survation gave “Remain” 45 percent and “Leave” 44 percent, with 11 percent undecided.

Six major bookmakers showed the odds heavily pointing to a Remain vote, with the likelihood of Britain staying in put at around 80 percent. The latest surveys were mostly conducted after the brutal murder of Jo Cox, a 41-year-old Labour politician who campaigned to remain in the EU, who was shot and stabbed in her northern English constituency on Thursday.

Her alleged killer, 52-year-old Thomas Mair, gave his name as “Death to traitors, freedom for Britain” at his first appearance in court after being charged with her murder.

In an interview with the BBC on Tuesday, Cox’s widower Brendan said she had been “worried” the debate may have been “whipping up hatred”. 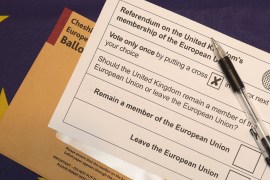 Ahead of the UK’s EU referendum, we examine the economic and political consequences of Britain leaving the Union. 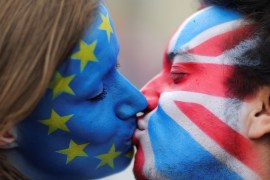 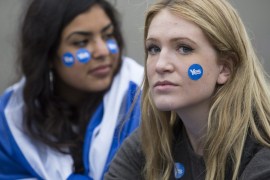