Iraqi forces are so far in control of one-third of the city of Fallujah, the US government has said four days after Iraqi Prime Minister Haider al-Abadi declared the city liberated from the Islamic State of Iraq and Levant (ISIL) group.

“Approximately one-third of the city of Fallujah has been cleared by Iraqi-led ground forces,” US Defence Department spokesman Matthew Allen said on Tuesday.

“The rest of the city remains contested and we will continue to support the government of Iraq in eliminating ISIL from Fallujah,” Allen added, saying the battle “has been and will continue to be a difficult fight”.

Abadi had announced that Fallujah, a long-standing stronghold of ISIL – some 50km west of Baghdad, was freed after government forces recaptured the government compound in the city centre.

The progress by government forces in the Fallujah comes months after they recaptured Ramadi, the other major city in the Sunni-dominated Anbar province.

The Iraqi army declared Ramadi liberated in late December, but fighting continued for weeks in some districts.

The government offensive that began on May 23 has displaced more than 60,000 people, with most people forced to fend for themselves. 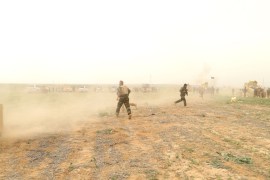